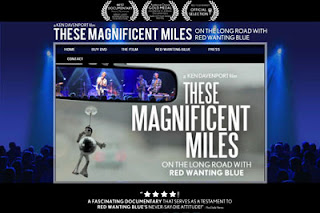 Red Wanting Blue is one of the top unsigned bands in the country. They’ve got thousands of fans and have played thousands of shows. But they’ve never had a record deal. And they’ve also never given up.
In These Magnificent Miles: On The Long Road With Red Wanting Blue, Director Ken Davenport follows “the hardest working rock band in America” (Scott Terry, Greg Rahm, Mark McCullough, Eric Hall, Eddie Davis and Dean Anshutz) as they record their eighth self-These Magnificent Miles: On the Long Road With Red Wanting Blue produced album and hit the road in search of the rock and roll dream they’ve had since they were kids. Will this new album be the one? Or will this finally be the end of the beloved band that has been trying to make it for more than 14 years?
Featuring interviews with OAR and past members of Red Wanting Blue, plus never-before-seen concert footage of Red Wanting Blue! Includes Red Wanting Blue’s top songs like “Where You Wanna Go,” “Vegas,” “Probably Nothing,” “Gravity,” and “Finger In The Air.”
Starring Scott Terry (Vocals, Tenor Guitar, Ukulele); Mark McCullough (Bass, Chapman Stick, Vocals); Greg Rahm (Guitar, Keyboards, Vocals); Eric Hall (Guitar, Lap Steel, Vocals); Eddie Davis (Drums & Percussion); and Dean Anshutz (Drums & Percussion).