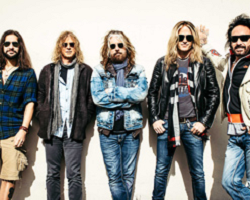 Is there anything in the world as exciting as toe-curling, fist-pumping, hard-as-hell rock and roll? We don’t think so, which is one of the reasons we love working with electrifying supergroup The Dead Daisies so much. From 2013, when they were fresh off the release of their self-titled debut album, to now, we’ve been lucky enough to promote several of their videos – and each one will have you banging your head.

To date, we’ve filmed two HIP Spotlight video interviews with The Dead Daisies. The first was in the spring of 2014, and they talked about the group’s formation and the story of their video “Lock ‘N Load” feat. Slash. Then, in 2016, we reunited with The Dead Daisies for another HIP Spotlight where they dove into their brand-new album Make Some Noise, guitar solos, and melting faces.

Check out the 2014 The Dead Daisies HIP Spotlight below:

And check out the 2016 The Dead Daisies HIP Spotlight here:

And don’t forget to check out “Lock ‘N Load”, “Long Way To Go”, and The Dead Daisies’ latest effort with twocolors, “Mexico”!