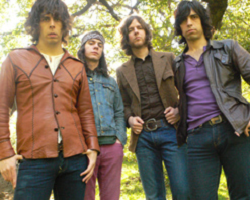 New York City has been home to many great artists of all genres, but there’s something quintessentially NYC about Mooney Suzuki’s brand of indie/garage rock. But with their 2007 album Have Mercy, they forged a sound and a style big enough to reach, and rock, the American heartland.

We had a blast working with Mooney Suzuki to promote their 99% video, and just as much fun meeting up with them to film this HIP Clip! In the interview, they talked about the new sound on Have Mercy, the hooks and riffs on “99%”, and choosing a treatment for the video. Check it out for yourself!

And if you’re not ready to stop rocking, check out the “99%” video.

Mooney Suzuki went on hiatus in 2008, but they reunited for two shows at New York’s iconic Mercury Lounge in July 2019. Both shows sold out quickly!