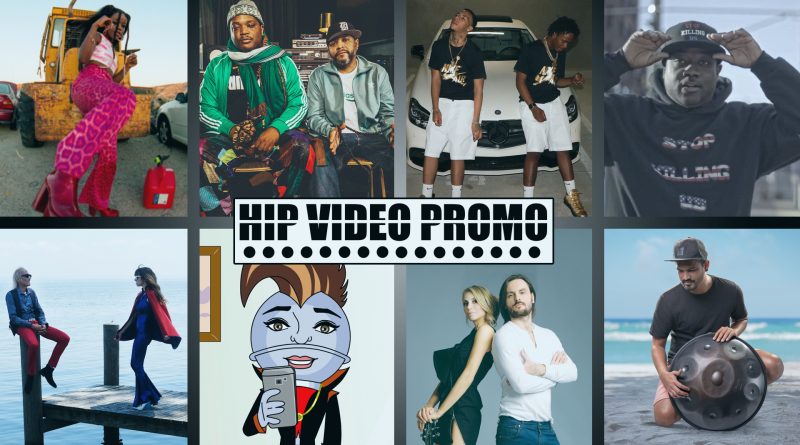 From rock to hip-hop to everything in between, a good music video helps you get the vibe for an artist’s sound. Our newest HIP Picks – Weekly Client Roundup is here- take a look at the videos above, and learn more about the clips by clicking on the links below.

Zimbabwean-born, Australian-based singer and rapper Tkay Maidza knows all about obsessions, intensity, and reveries. “You Sad“, her newest single from Last Year Was Weird, Vol. 2, follows “Awake” (a collaboration with Baltimore rapper JEPGMAFIA) and “Shook”. Award-winning UK filmmaker Jocelyn Anquetil has creative a video that renders Tkay as something of a hallucination, planting a phone as a sort of flower.

There’s no substitute for hard rhyme, and Shaheed & DJ Supreme – who have done multiple tours supporting Jurassic 5 – know that it’s the backbone of all the hip-hop classics. “1 Time 2 Many” is a timely broadside against police brutality, and director Daniel Roth matches the verses to footage of cops using excessive force with impunity and without apology.

Brisk and DayDay are young, they’re rich, and they’re kids, and these SoCal teens together make rhymes in the hip-hop duo Young Rich Kidz. Now signed to Rich4Life Entertainment, they’ve released their album Bag Runner and have a few videos under their belts. “Amber Alert”, the final track on Bag Runner, is the latest video, and here, a house party is clearing out but Young Rich Kidz are just beginning to settle in.

Minneapolis rapper Samar doesn’t do it for the cash or clout; he’s an advocate by nature. Alongside Tyrone Jackson, he created early childhood development albums during their times as bus drivers that received airplay on Radio Disney. At a young age, Samar was impact by the troubling roads his brothers went down, and promised his mom he would get them out of that situation. The public lynching of black people by police officials has been an ongoing tragedy long before the highly publicized murder of George Floyd, and “Stop Killing Us”–  released at the end of 2019 – calls for the end of the systematically normalized murder of black people at the hands of police. Taking to the streets of Minneapolis, Samar shows us he is ready for change and that he doesn’t hesitate to be at the forefront of it.

AV Super Sunshine’s unique name came at the suggestion of Grammy-nominated songwriter and producer James House, who came up with the idea of mashing up the artist’s initials (“AV”) with the song title “Super Sunshine Girl.” A native of Fond du Lac, Wisconsin, in 2019, he saw a spike in radio play in Asia, Europe, South America, and the UK with multiple number 1 hits on both the EuroIndie Music Charts and the World Indie Music Charts. With support from the BBC, AV also cracked the top 20 of both the DRT Global Adult Contemporary and Global Rock commercial airplay charts. AV first showed the world the original “Baby Goodbye” in 2014, followed by a hip-hop remix video and later “Baby Goodbye 2017 Dance”, a club-flavored house remix; now he’s back with “Baby Goodbye 2020”, an updated take on the song. The “Baby Goodbye 2020” video features high-quality color footage from the original “Baby Goodbye” video, along with grainy black and white footage of AV and his love – and muse – Philomena – adventuring through the city streets.

A-Lister is a cryptic virtual musician working in the multi-genre art-pop world; this artist remains a mysterious enigma, splitting the difference between contemporary pop, modern soul and funk, electro-rap, and songs inspired by film soundtracks. “Groove-A” is the whole Southern California cultural melting pot in one, and in the video (Chris Lowe & Ian Hotchkiss), A-Lister has taken over Los Angeles. His name is on the marquee at the El Capitan Theater and atop the Capitol Records Building in big black letters, and he’s got a star on Hollywood Boulevard – but the people singing along to the song aren’t famous, but ordinary Los Angelenos captured on the streets.

The handpan is one of the world’s most distinctive and unusual musical instruments, and percussionist Faizan is nothing short of a handpan master, making him one of the most recognized and celebrated handpan players in the world. His new single “Aether” is a collaboration with the Romanian composer Xenti Runceanu and the Amadeus Electric Quartet, a string group of uncommon daring and international acclaim. Faizan hails from the idyllic Maldives, and the “Aether” video (directed by Faizan, Nazaal, and Mohamed Amaan) takes the viewer to the Saii Lagoon Resort on a remote island that’s divided from the international airport by ten miles of crystal blue water.

Brother-sister duo The Forevers found their love of Communist Poland of the 1980s, as pirate radio broadcasts brought, among many others, the nothing-to-lose rock ‘n roll rebellion of Bruce Springsteen. Mikolaj Mick Jaroszyk and Natalia Safran have since made major moves in the music and film industries: their hit song “All I Feel Is You” appeared in the late Paul Walker’s film Hours. On “Rockets Fly” – the lead single for their latest album Interstellar Dwellwer (out now on Supersonic Soul Machine Records – The Forevers contemplate our place in a vast Universe; the track and the video’s epic shots of Earth from afar are meant to instill a “feeling of being understood, connected and lifted into that cosmic sphere we only sometimes get to dwell in.”

A remix of  The Forevers’ track “All I Feel Is You” – which was on the soundtrack to Flatliners – shot up to the US Billboard Top 20 Club Play chart, making them the only Polish artist to have a US Billboard chart-topping single. Natalia Safran and her husband Peter’s production house, The Safran Company, has produced major Hollywood successes like The Nun and The Conjuring. “Frederique” is their latest single, and its video – directed by Natalia Safran and Igor Drozdowski – is a breathless, mysterious pursuit that dashes and weaves among iconic locations on Venice Beach’s iconic boardwalk.