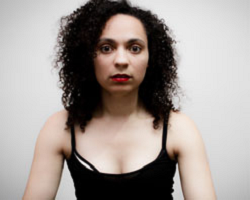 Some artists might mass produce and mass perform just to get their content out as fast as possible. But Shelita Burke carefully crafts her sound by what she dubs “emotional art music” and each gig by self-generating each booking.

Interestingly, she manages her music similarly to the way one would run a small business. Burke is extremely technical, and as a data scientist and cryptologist, she knew from a young age how important the internet would eventually be to independent artists. The pop singer has built her “tribe” by herself and even created a blockchain technology to help distribute royalty payouts more efficiently and quickly.

We were lucky enough to film a HIP Spotlight with Burke in 2016. She describes her song “Transfixed” in a very specialized way. She sincerely wants the song to gratify the neurons in the listener’s mind while also allowing viewers to look beyond the ordinary touches and feels to see a humanistic demeanor. An average day spent with someone is broken down into raw passion and instinctual need for connection and sensitivity. Burke is still active in pop culture today, from attending the Grammys and Oscars to playing shows every now and then, she always has content to surprise her fans with.