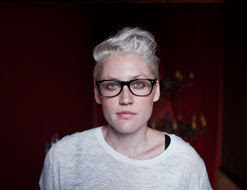 For quite some time, we have had the pleasure of working with the Kirtland Records crew and once again we are eager to present viewers with the astonishing and glorified music maker whom we have watched grow musically and stylistically—Sarah Jaffe. Following up on the charming and exquisite “Glorified High” video from her new album, The Body Wins, we are excited to bring her newest offering, the visually stunning “Mannequin Woman.”

Jaffe began working on the album The Body Wins the day she bought a bass and drum set from a pawnshop. That same day she wrote the rhythmic tune “A Sucker For Your Marketing,” a song that shaped her second full-length album. Jaffe had pent-up creative energy inside her, after spending most of the year traveling and touring behind her debut (Suburban Nature), seeing and feeling things, soaking up the world. The Body Wins may sound different to those introduced to her through Suburban Nature. It should. But it’s not by any grand design to change. It’s where she’s at now, a product of everywhere she’s been since Suburban Nature—literally and figuratively—and a hint of everywhere she might go from here.