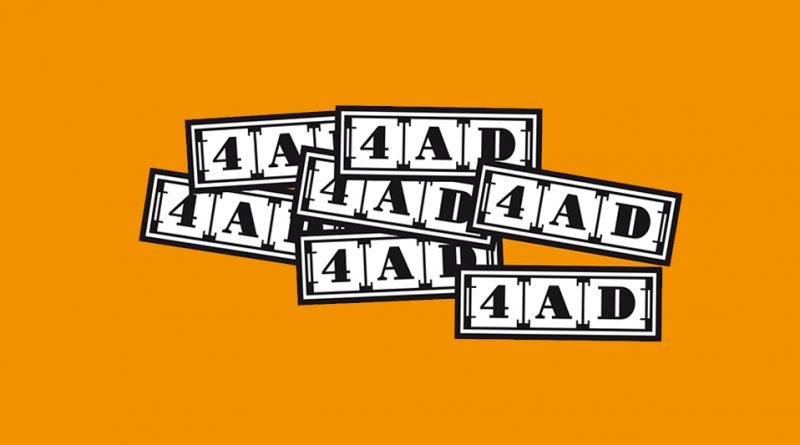 Over the last 20 years, HIP Video Promo has had the pleasure of working with some of the most outstanding and iconic record companies within the music industry. Every week, we’ll be going down memory lane and talking about one of the record labels we’ve had the pleasure of working with here at HIP. To kick off the first Record Label Spotlight, we’re starting with the one-and-only 4AD.

4AD is a British independent record label that sprung from parent label Beggars Company in 1980. It was founded by Ivo Watts-Russell and Peter Kent; after working at Beggar’s Banquet, the dynamic duo decided to start their own record label, Axis. But it quickly became known that another music company was already using the name Axis, so Russell and Kent looked to their promotional flyers for inspiration. Playing on the idea of progress and the new year, they came up with 1980 FORWARD, which soon became 4AD.

After splitting with Kent, Watts-Russell went on to run the label for almost 19 years. In that time, he established distinctive graphics, began a concentration on American rock music, developed a cult following, and even expanded to a new Los Angeles office. In 1999 however, Watts-Russell sold his share back to Beggar’s Group and started his own sub-label. Despite the partnership ending, Beggars Group continued to add artists to the 4AD roster. In 2007 Simon Halliday took over the label and found instant success with Bon Iver. The following year Beggars Group rejoined, which meant that several other labels fell under 4AD. Since then, 4AD has had countless new releases from various artists, with many of them becoming quite successful.

Throughout the years, 4AD has had its share of amazingly talented artists, many of whom we’ve gotten to work with here at HIP!

The very first 4AD artist we had the honor of working with is The National. Considered the originators of their sound, The National have been rocking non-stop since their debut album in 2001. In 2017 HIP Video Promo helped out with their video for “The Day I Die”, the fourth single from their 7th studio album Sleep Well Beast. The video itself gained massive buzz on YouTube, with 230,000 views in its first three days. But the video’s concept is relatively simple. It shows the band at soundcheck but added visual effects make it fascinating.

Next up on the 4AD artist list is Tune-Yards. From a humble start in New England to working in California, it’s been a consistent climb to the top. In 2018, we promoted their music video “Heart Attack,” their first release after a four-year hiatus. The song is an upbeat, foot-stomping jam, and the video is no slouch, either. The video looks like something out of the ’80s with its colorful wardrobe, makeup, and the muted pastel sets and backgrounds. This song and video will definitely have you dancing on your feet.

Last – but certainly not least – on our list is Tkay Maidza. Tkay Maidza is an Australian-based, Zimbabwean-born dynamite rapper and singer. What started off as a fun casual recording session ended up skyrocketing her career. Earlier this year, we had the joy of promoting two of Tkay Maidza’s music videos. The first video we promoted was “Shook” back in May. The lead single off of Last Year Was Weird left an impact. Taking place in a dusty junkyard rocking some 90’s fashion with Missy Elliot inspired beats is sure to leave any viewer feeling a little nostalgic. The second video we had the pleasure of promoting is “You Sad.” In this video, we leave the dust and earthy tones behind as we step into this technicolor world. With flowers in her hair and mountains all around, this video transcends us to another realm. Do you want to enter this vibrant world? Watch these two Tkay Maidza videos.

4AD has had massive success in its 40 years of business. Ranging from rap to indie to rock to metal, the variety of artists they have introduced to the world is almost unfathomable. It’s no wonder they’re one of the most fantastic record labels in the music industry.