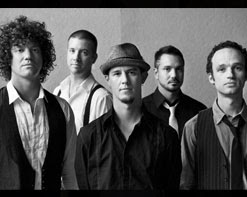 It’s not mere lip service to call this five-piece group a “true original.” Pronounced TOO-bob CREW, the band makes music that could be described world-fusion, poly-rhythmic rock for the jam-band circuit. Their instrumentation includes (but is not limited to) the soku, the kora and the kamelengoni. And while all that is as good as gibberish to the unschooled, musical education never sounded so cool. Released by the globally-informed and always-interesting Nat Geo Music, “Cluck Old Hen” is a bonus track that will be included on the digital rerelease of the band’s critically-acclaimed second album TK2.

In the video, directed by HIP favorite Spookie Daly (You Scream I Scream, Heatbox, JJ Grey and Mofro) the story of “Cluck Old Hen” comes to life from the pages of a book, as a farmer closes up his barn doors and retires to his home with the setting sun behind him. When his lights go out, the barn animals – portrayed by men and women in costume – quickly rise from feigning sleep their hay beds and gather for a private concert courtesy of Toubab Krewe, and the jamboree begins. When the noise and the lights of the party turn the ears of the farmer, he runs back to the barn and discovers their secret celebration, only to join the band on stage for a searing electric pedal steel solo. Yes, it all sounds a little crazy. But you’ll be wishing you had a ticket for this performance. FULL BIO HERE