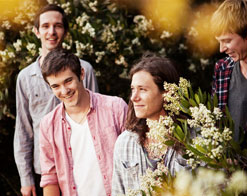 Howdy friends, it’s the HIP Video Promo team coming at you with another clip from one of indie music’s biggest buzz bands! When Fake Problems released their SideOneDummy debut, It’s Great To Be Alive, and their first video for “The Dream Team” the indie rock and punk scene was quick to embrace them as pivotal members of the next generation that would carry on the mantle of these hallowed genres. Fortunately for all of us, they have taken up that challenge and surpassed most expectations. While many were instantly drawn to frontman Chris Farren’s similarities to fellow Florida punk stalwart Tom Gabel (Against Me!), a little bit more digging into their sound through their second single “Diamond Rings” revealed a little bit more of a Franz Ferdinand approach to their songwriting. Many tours and accolades followed and the band was firmly established in the scene.

With their newest album, Real Ghosts Caught On Tape, Farren and co. have expanded their sound even further. Take their new single, “Songs For Teenagers”, for example. Initial listens invite comparisons to such indie darlings like Vampire Weekend, with theGraceland-esque playfulness of the music, but all while striking a serious lyrical tone. Of course, we’re biased when it comes to Fake Problems, because we love everything they do. If you don’t want to take our word for it, then perhaps you’d be more inclined to agree with the fine folks at MTV Networks, who chose the band to be a featured artist in their PUSH initiative in January 2012. Along with premiering the video on MTV.com, PUSH (Play Until Someone Hears) also consists of a cross platform promotion that includes broadcast, online, licensing and more to achieve maximum impact amongst their viewers for the selected group. Or check out The Gaslight Anthem’s cover of “Songs For Teenagers” for more assurance that this band is appreciated by people with good taste everywhere.

The new video for “Songs For Teenagers” plays like an advertisement for the upcoming summer. Leisurely strolls on the beach and sailing the calm Florida waters set the mood, and the musical aesthetic creates the perfect compliment. But like the empty stares and expressions on the band members faces as they go about their day, there is another, deeper level that subtly disrupts the mood. Lyrically speaking, “Songs For Teenagers” digs into the darker side of addiction and shows how a dependency on drugs can be both unfulfilling and detrimental to one’s well-being. We’re not sure of his exact inspiration for this particular song, but we commend Farren for his willingness to broach the subject, and think that teenagers everywhere would be wise to heed the no-frills message of this song.

We’re excited to be a part of the Fake Problem team once again and strongly encourage you to get in touch with us to check out the new album, Real Ghosts Caught On Tape, and to also catch the band this spring on their national tour with Say Anything. Lots of great things happening with Fake Problems, and you can be a part of them! If you need more info please contact Andy Gesner and the HIP Video Promo crew at (732)-613-1779, or email us at info@HIPVideoPromo.com.