Five Finger Death Punch “Under And Over It” 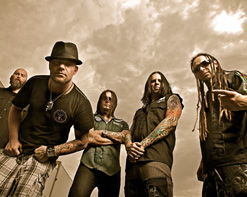 We heard your call, and headed it, fellow programmers! We know you wanted something big and loud to wake you out of your soft rock slumber, when those hip hop beats just aren’t fast enough, when you need something to, you know, hit you like the back of an assault rifle. It’s Andy Gesner and the HIP Video Promo crew, here with a spectacular new video from the guys of Five Finger Death Punch. “Under and Over It” is a non-stop riot of extravagant proportions that is guaranteed to be one of the most exciting metal videos this year.

Five Finger Death Punch are no longer the best hidden secret in metal. Since we started working with them for their 2007 debut album The Way of the Fist (certified gold), their sphere of influence has grown to massive global proportions, leading to headlining/playing major festivals like Rockstar Mayhem Festival, Download Festival, Rock am Ring, Family Values, and many more several times in the last few years. The band has had big features in virtually every major magazine in the genre including Decibel, Alternative Press, andTerrorizer. FFDP were also on the cover of Metal Hammer andRevolver, and have a prominent feature in new Kerrang! for the October 11th release of their new album, American Capitalist. To add to the mass media onslaught, several of the songs from their sophomore album War Is The Answer (also certified gold) are part of the Rock Band 2 lineup as well as the Namco Bandai gameSplatterhouse! To add to their already well-established credibility, the band travelled to perform for our troops in Iraq last year. War Is The Answer debuted and peaked at # 7 on the Billboard 200 in addition to topping the best in Billboard’s Rock, Independent and Hard Rock Albums charts.

The mega-band returns to dominate 2011 with their leading single “Under and Over It” from the upcoming American Capitalistalbum, produced by Kevin Churko (Ozzy Osbourne) and engineered by Randy Staub (Metallica, Motley Crue). From the first several seconds it will be crystal clear that all of the fame and success has not toned down their signature roar one bit. In fact, it magnified it tenfold. The track is as tight as a heavy metal song should be in the verses, sporting insane drum fills synced to deadly guitar riffs for maximum impact. The vocals thunder with fury to get any metal fan into an instant moshing frenzy. Here’s the thing that makes this band so great, and separates them from their contenders: FFDP never ever forget the crucial impact of a chorus line. While many metal bands get lost in the brutality of their own sound, Five Finger Death Punch wield it masterfully, allowing each refrain to be memorable and melodic, creating a dramatic dynamic in the track and truly a great lead single.

The video for “Under and Over It” is equally remarkable, as the band decides to have a little fun with all of their well-deserved glory. The clip channels a Motley Crue fantasy filled with gorgeous and voluptuous models doing all sorts of crazy dirty things, which we’ll let you witness for yourself. The band is found getting carried away by rock & roll excesses such as heavy partying and lawless driving, all in good humor, of course. The clip really ends with a bang as the band hijack a private plane, get the crew wasted and crash it into the side of a mountain, officially being the first group to party on parachutes! As guitarist Zoltan tells it in his own words, “We wanted to hit a pretty sarcastic tone with it, so it looks like a typical big cock rock video, but in a tongue in cheek way. We put all the “big-time video” clichés in it except for the booty shake… or maybe we even got that, I don’t remember. We do have the party scenes, cars, airplanes, mansions, pools and girls—of course you can’t have a raaawwwk video without your token pool scene. Also, it’s shot from a behind-the-scenes perspective where you can actually see the director ‘trying’ to direct our music video. He is running in and out of the frames, posing the band, trying to make us act a certain way, which is pretty typical of most video shoots and it always annoys the hell out of the bands. It’s an interesting angle the fans never get to see, and adds to the sarcasm of the whole clip. We just wanted to have fun with it, and actually it ended up being a blast and more of a party than a stressful video shoots. Maybe we’ll shoot part two for this [Laughs].”

We’re thrilled to be working with the Prospect Park crew once again and can’t wait for you to see Five Finger Death Punch’s glorious return to the stage. We’ve got all things Five Finger Death Punch here at the office, including copies of the awesomeAmerican Capitalist, so please be in touch if we can hook you up! If you need more info, call Andy Gesner at 732-613-1779 or e-mail us at info@HIPVideoPromo.com. You can also visit www.FiveFingerDeathPunch.com to find out more about Five Finger Death Punch and the dates for their national headlining mega-tour with All That Remains and Hatebreed.