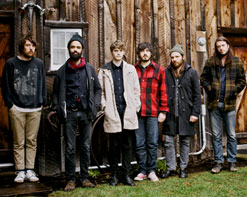 Ahoy, fellow music lovers! This is your friend Andy Gesner once again with a great new clip from one of the finest and most acclaimed bands making music today. Hip Video Promo is extremely proud to present “Grown Ocean” – the latest single and first video from Fleet Foxes’ hotly anticipated sophomore LP Helplessness Blues.

If by chance you were vacationing on a neighboring planet for the majority of 2008, there’s a small chance you may have missed the enormous amount of critical praise heaped upon this Seattle sextet upon the Sub Pop release of their self-titled debut LP. Filled folk-rock goodness, brimming with beautifully chilling harmonies, and sealed with singer Robin Pecknold’s gorgeous tenor, Fleet Foxes stood out from the pack and resonated with critics and audiences around the globe. Their unique and uncompromising take on folk, classic rock and AM country was glowing with a familiar warmth and yet sounded fresh, vibrant and even otherworldly. Its lack of commercial pretense gave it an integrity that endeared them to critical tastemakers, but it was the pure musical beauty it delivered in spades that endeared Fleet Foxes to just about everyone who heard them. Rolling Stone gave the album four out of five stars, comparing them to the Beach Boys, Animal Collective and folk-rock forefathers CSN. Pitchfork rated the album 9.0 out of 10, and went on to name it their Album of the Year. With the bar set so high for Fleet Foxes, it’s understandable that Pecknold and his band have taken their time to deliver a followup. If “Grown Ocean” is any indication (nevermind the great early album reviews) Helplessness Blues will soon place Fleet Foxes back into the center of the cultural conversation.

In the video directed by Robin’s brother Sean Pecknold (who previously directed clips for both “White Winter Hymnal” and “Mykonos” from their debut album), soft earth tones and sunlight saturate the frames of the reel, giving it the feel of a home video travelogue from an earlier era. It presents the band candidly, quickly switching between shots of them on the road, in the studio and simply hanging out with each other. The many different scenes are interspersed with beautiful shots of the natural landscape, some random curiosities, and even a few bits of animation. The linear concept makes for a dreamy video that perfectly aligns with the song which is, in fact, about dreams.

“Grown Ocean” is a lovely and daring composition that swirls with a slide guitar and the occasional flourish of flute, floating weightlessly over a steady acoustic strum and a relentless bass drum beat. Pecknold sings “In that dream I could hardly contain it / All my life I will wait to attain it.” The enchanting harmonies are still there, and the reverb is as rich as ever, but this time around the Foxes sound slightly darker, making their musical magic all the more intriguing. Pitchfork, in awarding the track their distinguished “Best New Music” status, wrote, “[F]rom the first heraldic strums of “Grown Ocean”… Robin Pecknold’s dream holds your attention.” This very special video only serves to enhance this song’s grasp on your imagination.

It is our distinct pleasure to once again be a part of the Fleet Foxes team, courtesy of our friends at Sub Pop. We can only assume that your excitement for this new video will be on ours so we are fully stocked and prepared to hook you up with copies of Helplessness Blues and other Fleet Foxes goods. If you need more info, call Andy Gesner at 732-613-1779 or e-mail us at info@HIPVideoPromo.com. You can also visit www.SubPop.com, or www.FleetFoxes.com to find out more about Fleet Foxes.