The Futureheads “I Can Do That” 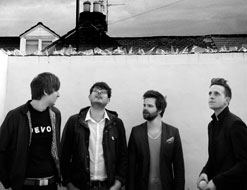 Fresh off of the unparalleled success of their video for “Heartbeat Song,” The Futureheads, in fact, have not missed a beat. Their follow-up video for “I Can Do That” promises to be just as memorable – if not more – and you won’t want to miss a minute of this clip animated like a comic book playing out in front of you. It’s a type of animation that we’re sure has been done before, but trust us when we say The Futureheads have pulled it off like no other. In fact, to achieve that perfect portrayal of each band member, they actually filmed footage to be used as a template for the cartoon version of themselves. While most animated videos are done in a wholly digital environment, this video has the feel of real action and an even a true human element. You’ll need to see it to really appreciate how cool this is!

Those who are already most familiar with this British pop-punk foursome (and how can you not be? They’ve been around for a whole decade) know that the band consists of laid back guys just trying to have fun and make good music. So while the concept of shooting this video in a comic book style is to be expected from The Futureheads, what you wouldn’t expect is the guys taking on the persona of crime-fighting super heroes.

If that wasn’t enough to pique your interest, you simply just need to watch the video. This entertaining clip plays out like The Futureheads’ very own comic book in every way – complete with fighting at a local bar, stealing money, cloning in the middle of the street and one particular band member transforming to a greater being a la the Incredible Hulk. Another band member even has X-ray vision, which he takes advantage of a little too much. In the end, there’s all four of The Futureheads decked out in blazers fighting the ultimate bad guy at the bank who attempts to set the band on fire in addition to electrocuting them.

In typical Futureheads fashion, the song for “I Can Do That” has infectious, singalong lyrics that vocalist Barry Hydes delivers with an anthemic energy. The single is the second off of The Futureheads’ latest full-length effort, The Chaos, which was recently released in the U.S. in early June. The album has already charted at No. 3 on the UK’s indie chart, and with Billboardrecognizing the band’s “more refined sound” with their “punch passion … still intact,” it will only be a matter of time till the album makes waves in the states.

Thanks to the folks over at Dovecote Records for trusting that here at HIP, we’ll deliver for The Futureheads once again with their video for “I Can Do That.” If you need more info or would like copies of The Chaos for your on-air giveaways, call Andy Gesner at 732-613-1779 or e-mail us at info@HIPVideoPromo.com. You can also visit www.DovecoteRecords.com orwww.TheFutureheads.com to find out more about The Futureheads.

For info about The Futureheads’ previous video, “Skip To The End” click HERE