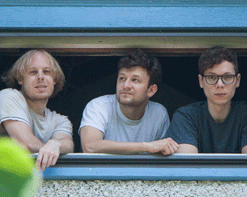 Since 2005, extraordinarily talented indie/pop trio , Someone Still Loves You Boris Yeltsin have without question established that in a world oversaturated with bands trying to “make it,” they possess something most bands lack these days… lasting power. Harnessing a unique sound that transports you back your youth, a time of summer crushes and late night hang-outs with old friends, the Springfield, Missouri, threesome consistently craft songs that tug at your heartstrings and remind us that we were all once young, innocent and the world was our oyster. Drawing as much from the pop-punk power chords their brains were wired to love as teens in the late 90s, and as the multi-layered pop of the ‘60’s and ‘70’s that they strive to emulate, SSLYBY have been writing songs for over a decade based on the timeless principles of beautiful melodies and good harmonies. Luckily for us, the band just released a fresh new record, Fly By Wire, and their kick-off single “Nightwater Girlfriend,” embodies everything fans have come to love and expect from them.

Consisting of Philip Dickey (vocals/guitar/drums), Will Knauer (lead guitar), and Jonathan James (bass/drums/backing vocals), Someone Still Loves You Boris Yeltsin have released four critically acclaimed and much beloved albums via Polyvinyl Records: Broom (2005), Pershing (2008), Let It Sway (2010), and now in 2013, Fly By Wire. The new record came together after a period of minor uncertainty for the band until they were unexpectedly invited by the Boris Yeltsin Foundation (which had been tracking them online for years) to spend six days in Russia to meet with Yelstin’s close friends and personal translator, perform at an elementary school after the U.S. consulate named them cultural ambassadors for a day, and conclude with a live set at Old Nu Rock (making SSLYBY the first American group to play at Russia’s largest winter rock festival). The once-in-a-lifetime adventure marked a turning point for SSLYBY. “I used to joke that we would break up if Boris Yeltsin ever found out about our band,” says Dickey. “So I figured this was either the death or rebirth of the band.” “The whole experience of going to Russia renewed my belief that songs and words have power,” explains Dickey. “I wanted to make a record before that feeling went away.” The band returned to the states, specifically to the practice space/attic in lead guitarist, Will Knauer’s parent’s house, where they crafted and tracked their breakthrough debut record, Broom (which catapulted them into indie darlings status), and got to work on new songs that would soon become Fly By Wire.

Premiered on the mighty AV Club, and directed by Brook Linder, who has directed past SSLYBY videos such as last year’s “Critical Drain,” in addition to numerous tour videos, as well as directing music videos for bands like Free Energy and Ha Ha Tonka, the poignant and vintage-y looking music video for “Nightwater Girlfriend” was inspired by a ticket deal at a Branson, MI (known as the dinner theatre capital of the world) water park, which is 30 minutes from SSLYBY’s hometown of Springfield. From the Titanic Museum to the God And Country Theatre, the clip seeks to celebrate the glory of the Branson strip. The resulting video is the band’s lighthearted attempt at a ‘90’s style Beastie Boys video set in Branson, and though it’s probably too hardcore for the sleepy town, it’s still a pretty apt love letter to the Show Me state’s second biggest tourist town. “Nightwater Girlfriend” will fill you with all kinds of nostalgic feelings and will have an undeniable spot in your Fall playlists.

Someone Still Loves You Boris Yeltsin is set to embark on a two month long Fall tour that will take them from NY to CA and everywhere in between in support of their new album, Fly By Wire. If you need tickets to a show, would like to interview the band or have any questions at all on these indie rockers, please feel free to contact Andy Gesner and the HIP Video Promo staff at (732)-613-1779 or email us at info@HIPVideoPromo.com . You can also visit www.PolyvinylRecords.com or www.SSLYBY.com for more info on SSLYBY.

For info about Someone Still Loves You Boris Yeltsin’s video, “Sink/Let It Sway” click HERE