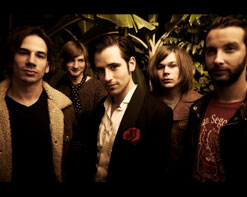 If you dare to touch the pen of the menacing Statue of Anonymous that sits in a park at the heart of Heroes’ Square in Budapest, it is said to make you a better writer. The Moog, who hail from Hungary’s biggest city, have had the unfair advantage of hanging out with the Grim Reaper-looking mystery man their entire teenage lives, and it left a mark! With the release of their third full-length entitled Seasons In The Underground (MuSick Recordings), dropping this spring on April 10th, The Moog are set to claim their title as the country’s hottest commodity.

The Moog combine the sexiness of dirty garage rock indie rock with warm synth fuzz and massive open pop hooks to bypass the dark matter of familiarity in their genre. The boys are no strangers to working with the biggest names in the industry, as their last two albums include collaborations with Jack Endino (renowned for his work on Nirvana’s “Bleach”) and Geoff Ott (Pearl Jam, Queens Of The Stone Age, Mark Lanegan). This time around, The Moog have gone after the man that inspired them, Ken Scott. Scott has engineered albums by The Beatles, Jeff Beck, Pink Floyd, The Rolling Stones and Procol Harum and produced David Bowie’s The Rise and Fall of Ziggy Stardust and the Spiders from Mars along with albums by Devo, Supertramp, and Kansas. The Moog have encapsulated Scott’s unique vision and created their own inception of rock and roll essence. Seasons In The Underground is the sound of a band leaving behind their comparisons to The Strokes and The Hives to incite their own sonic revolution.

The opening track of the record, “Seasons Change In The Underground”, starts prominently with the instrument that bears the same name as the band and is the foundation for the new video we’re bringing you today. However, don’t for a moment think this is a cheery synth-in-the-foreground waltz. Just like the song title varies slightly from the album title, this album is a step towards a newfound energy and electricity from the band all while maintaining the qualities we love about The Moog. In the video, we see The Moog engaging in some of the darker sides of humanity, starting with their involvement in a back room poker game gone wrong. After presumably failing to own up to the bet, frontman Tonyo Szabo and the boys are dragged out by the hides, with Szabo being taken away to an undisclosed location and being left in the care of several young ladies. Maybe it’s a case of Stockholm Syndrome, or maybe just being held captive by young ladies isn’t such a bad thing, but we see him much more comfortable with his surroundings, even teaching one girl how to fire a BB gun. But like any loyal companions would do, the rest of The Moog hatch a plan to spring him from his jailed state. During their raid, the lines blur over who is really good or bad, but one thing is for sure, they aren’t leaving without their buddy! It’s a thrilling scene to watch and is a solid encapsulation of the theme of the song! Directed by up and coming Hungarian directors Tamás Gács and András Jeli, the clip lives on the edge of surreal and reality, and is a very promising offering from the duo, helping them establish themselves to American viewers.

We’re really pleased to once again be working with our good friend Art Brousseau and MuSick Recordings to continue to develop this band here in the US. We’re stocked with copies of Seasons In The Underground and would love to get you a copy! And after a few performances at this year’s SXSW Festival, the band will be touring the US during the Spring and Summer, so please hit us up for all things Moog and let us know what we can do to make sure you program this video! If you need more info you can contact Andy Gesner at (732)-613-1779 or email info@HIPVideoPromo.com /a>. You can also visit www.MuSickRecordings.com or www.Moog.hu for more info about The Moog..

For info about The Moog’s “When I See You” video, click HERE

For info about The Moog’s “Everybody Wants” video, click HERE

For info about The Moog’s “You Raised A Vampire” video, click HERE