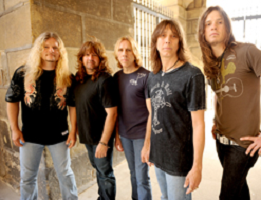 After 20 solid years of promoting music videos, many of our videos have skyrocketed to the top. Today, we present you with one of our most-watched videos on our YouTube channel. Today, we’re spotlighting “Fallin’ Apart” by true-blue rock-n-rollers, Tesla. The video was released in the spring of 2009, a few months after the October 2008 release of the band’s sixth studio album Forever More. To date, the video has reached over 200k views on YouTube.

Tesla has always had a way of blending high-octane hard rock with a personal connection: it’s the type of music you can rock out to while also saying, “Hey, this makes me feel something.” So it’s no surprise that for the “Fallin’ Apart” video, they decided to shoot in their hometown of Sacramento, California. The video, which was directed by Ken Nicholson and Frank Hannon, follows a young couple as they attempt to repair a relationship that’s on the verge of splitting. As if this all-too-familiar love story isn’t enough to draw you in, the video also features a cherry-red 1956 Thunderbird – a classic American rock and roll car. Check it out for yourself below!

Tesla have since released two more albums: Simplicity in 2014 and Shock in 2019, and prior to the current situation, were touring regularly. Check out TeslaTheBand.com to see what they’re up to!