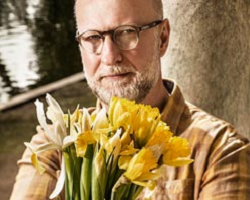 From founding Hüsker Dü to leading Sugar to his solo career, there’s no question Bob Mould has left his mark on the world of alternative rock. His first period of a solo career began in 1988 after Hüsker Dü broke up. After Sugar played their final show in 1995 and broke up the following spring, Mould once again focused on his solo music career. And things were off to the races from there, as he released album after album of his original songs.

Beauty & Ruin, his eleventh solo album, was released in June 2014 and just after it was released we were proud to promote the video for “I Don’t Know You Anymore”, the album’s lead single. “I Don’t Know You Anymore” tells a familiar tale: haven’t we all thought over and over about a person who won’t escape our minds but isn’t in our life anymore?. The video begins with a cameo from The Decemberists’ Colin Meloy, who advises him that if he wants to succeed as an artist, he’s got to update social media constantly, make people believe his music will make their life better… and have a celebrity cameo in every video.

We had the pleasure of working with Bob Mould on two more videos: “Voices In My Head”, in February 2016 and “Hold On” in April 2016, both from the album Patch the Sky. Check out these videos below!

Mould followed up Patch the Sky with Sunshine Rock in 2019, which debuted at 192 on the Billboard 200. Check out BobMould.com for more!