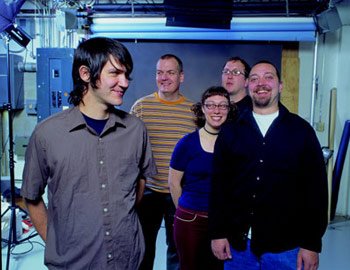 You might not think of Omaha, Nebraska as a musical hotspot, but believe it or not, this midwestern city has been home to some great artists, including indie/emo band Cursive. Formed in 1995, they released The Disruption EP in 1996 on Lumberjack Records; the Sucker and Dry EP in 1997 on Zero Hour Records; and their debut album Such Blinding Stars for Starving Eyes in 1997 on Crank! Records. But Cursive then broke up in 1998, releasing The Storms of Early Summer: Semantics of Song on beloved Omaha indie label that fall. They returned a little over a year later, in the summer of 1999.

It was with Cursive’s third album, Domestica, that they achieved critical success (Pitchfork scored it an 8/10). The 2003 follow-up The Ugly Organ was released on Saddle Creek, the Omaha label home to Bright Eyes, the Faint, Desaparecidos, and so many more. With continued critical appreciation (Rolling Stone gave it a 4/5 and Alternative Press rated the album a perfect 5/5!) and increased commercial success (the album had sold over 170,000 copies by its 2014 10th-anniversary reissue), things for Cursive were only going up.

The first time we teamed up with Cursive was in August 2003 to share the “Art Is Hard” music video with the world. Unusual in every respect, the song is incredibly listenable, with frontman Tim Kashner’s intense vocals accenting the sense of grandeur in the song. Director Travis John Dopp (of the band Small Brown Bike) and the band take the viewers through the opening of a chaotic – but intensely memorable – performance.

Next up, we worked with Cursive to promote the “Some Red Handed Sleight Of Hand” video in February 2004. Another track from The Ugly Organ, “Some Red Handed Sleight Of Hand” clocks in just under two minutes. Directed by Jun Kawaguchi, the video shows them doing what they do best. But it’s not a straight performance shot: shot while the band were on tour in Japan at the Shinjuku Liquid Room, it features rapid fire edits, multiple camera angles, and still photographs by Hidetomo Hirayama of the band members: Kasher, cellist Gretta Cohn, bassist Matt Maginn, guitarist Ted Stevens, and drummer Clint Schnase.

Lastly, in May 2004, we promoted Cursive’s “The Recluse” video. This one takes a different artistic approach: part nightmare and part B-movie homage. The track – and its video – is claustrophobic, paranoid, self-referential, and… darkly funny. Cursive aren’t alone in “The Recluse”: director Mike Malone casts Todd Baechle of labelmates The Faint as a horror-movie victim.

In the fall of 2004, following a tour with The Cure, Cursive announced an indefinite hiatus. Kasher went to work on his side project, The Good Life, before pausing to start work on Cursive’s fifth album in 2006. Happy Hollow was released that August. After a few more releases on Saddle Creek, the band launched their own label 15 Passenger in 2017, where they reissued their first two albums. Since then, Cursive have released two more albums – Vitriola in 2018 and most recently Get Fixed in 2019. What’s next for Cursive? Only time will tell, but we have a feeling it will be worth watching!