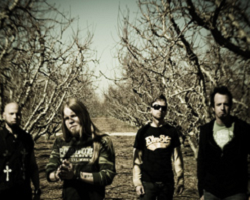 With over two decades of unyielding resilience and tenacity, Drowning Pool has remained true to their followers despite tragedy and lineup changes. Since 1996, the heavy rock Texans never skimp on fiery adrenaline and hell-raising chants. They have flared the stage alongside Ozzy Osbourne, Mötley Crüe, and Papa Roach, while their last three albums have been anchored in the Top 5 on Billboard’s Hard Rock chart. Drowning Pool has one mission and one mission only: to deeply connect with those who endure the unfortunate trials and tribulations. Regardless of race, class, or lifestyle, the members hope their music makes each day easier for everyone. In short, their music is downright an “unapologetic celebration of life’s joy and pain.”

One stance that Drowning Pool advocates for is supporting the military and its veterans. In their 2007 music video for “Soldier”, the band rocks out to a sea of uniformed personnel. They’re notorious for touring military bases from Iraq to North Korea and reflect on those experiences of rage and emotion. The clip combines raw footage of soldiers at war, enhancing the song’s intensity and sovereignty.

A year later, they released a chronicle of a relationship in disarray in “37 Stitches”. The clip is edited to resemble a home movie; it’s intimate, personal, and really gives us a behind the scenes look of their ferocious shows. We watch them get ready to go on tour, say their temporary goodbyes, and kiss their girlfriends one last time before their extended sojourn. Despite their wild concerts, “37 Stitches” gives a personal touch to the Drowning Pool rockers.

No matter the genre, everyone can come to a general consensus of what an ideal weekend is. Drowning Pool shows it off their music video “Saturday Night.” They’re tired of the monotonous and draining schedules and, instead, want every day to be lived like the weekend: girls, alcohol, and wild rides. Drowning Pool is ferocious and encircled by a chaotic crowd while a camera in a first-person perspective brings us through a dazed, substance infused Saturday night. Like lead singer Jason Moreno states: they’ll have plenty of time to sleep when they’re dead.