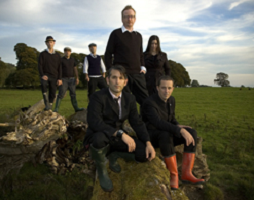 Combining Irish music and spunky punk rock might sound bizarre to a person who isn’t keen on the genre, but Flogging Molly is the best band to use as an introduction. The seven-piece formed in Dublin in 1997 and got their start by regularly playing in the L.A. bar, Molly Malones, and decided to take their music to the road. Their explosive and energetic live performance had them touring rigorously throughout the world. They are currently signed to their own record label, Borstal Beat Records, which gives them the creative freedom to do what other labels wouldn’t let them (like opposing the idea of using traditional Irish instruments in their music).

We first worked with Flogging Molly in March of 2009 when we promoted their music video for “Float.” The clip follows the journey of a plaintive – but surprisingly expressive – stick figure from atop a filthy table in a city flat to a ride between the waves at the seashore. He’s exhausted by the weight he carries but is motivated by the fascinating views he stumbles upon. As the camera switches perspectives, we wonder about our hero’s fate as the waves become rougher.

A year later in 2010, we promoted three of their music videos. “Punch Drunk Grinning Soul” addresses post-traumatic stress disorder metaphorically, but powerfully. We’re introduced to a rabbit, bruised and scarred from some off-screen battle, who returns to his home scared and haunted by flashbacks. The rabbit must deal with the trauma as he fights for his place in the forest once again.

The next two songs are live from the Greek Theatre in Los Angeles. “Requiem For A Dying Song” and “Seven Deadly Sins” were filmed by Kevin Custer and prove the magnificent power of Flogging Molly’s crowd control. They bring the capacity crowd to their feet and turn the floor into one giant dance floor. All of the exciting mayhem and craziness are expected at a Flogging Molly show.

After more than two decades of releasing music, hundreds of studio sessions, and endless world tours, Flogging Molly recaps the highlight of their careers in “Going Home.” Lit by the soft glow of the sun, the genuine clip showcases their best onstage performances and sentimental studio sessions. Flogging Molly pays homage to their roots in order to keep themselves leveled and prove to fans that over 20 years of fame hasn’t gotten to their heads.