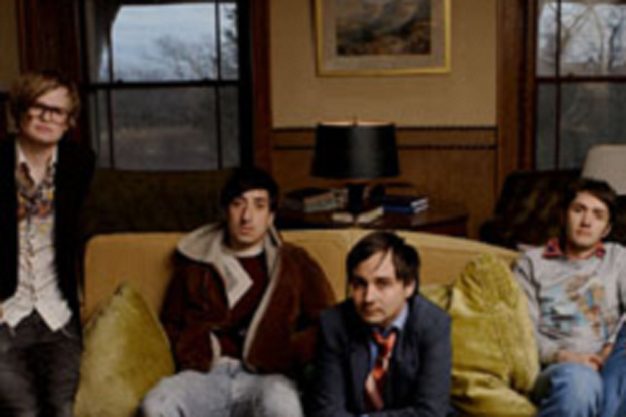 Beginning as a humble home recording project in Edward Droste’s Brooklyn apartment, Grizzly Bear later became one of the most acclaimed indie-rock bands in the 2000s and 2010s. In that small apartment, Droste laid down the groundwork for the band on a tape recorder. Eventually, multi-instrumentalist Christopher Bear, multi-instrumentalist/producer Chris Taylor, and guitarist/vocalist/songwriter Daniel Rossen joined Droste. Through the years, Grizzly Bear had a flurry of success, including their album Veckatimest debuting at number 8 on the Billboard 200, touring with Radiohead, and releasing “Slow Life” for The Twilight Saga: New Moon. Since 2009, Grizzly Bear has broken up and reconvened a few times and even went separate ways for a while. But in 2017, they rejoined to release Painted Ruins.

In March 2007, we promoted “Knife” which used the desert as a broad canvas for their wildest fantasies. One of the main characters in the video is a scientist who is a strange mix of primitive and cerebral, and the reason for his presence among these rocks and ridges is left unexplained. The second is a woman made entirely of stones. As the scientist is lying on the ground injured on the job, the stone woman places rocks on his chest to seemingly “heal” him. As he tries to walk after her, she disappears into a cavity that appears in the sand.

The second video we worked on is their most popular song, “Two Weeks”. The members of Grizzly Bear are shot in a church, bow-tied, sitting in chairs, and staring at the camera. They’re made up to look like artificial dolls and sing along with rosy cheeks and cartoon eyes. All at once, the musicians’ faces shine from within, and when they open their mouths to harmonize, white light pours out from between their lips. Sparks shoot from their brows, flames erupt from the crowns of their heads, and by the end of the clip, the angelic-sounding band is enwrapped in heavenly radiance.

In July of 2017, Grizzly Bear released the video for “Neighbors” off of Painted Ruins. A song that is a “rumination on the inevitable fading that happens between two people post-separation, even if they live right next to each other.” The couple in the video camouflage into their surrounding environment; as the camera zooms in on bedsheets, it will next show the woman wrapped in the same design bedsheets or the man covered in grass and fence pieces as he gardens in the backyard. It also highlights the similarity in nature, from geometrical shapes to colors, the same designs can be found in micro and macro parts of the environment.