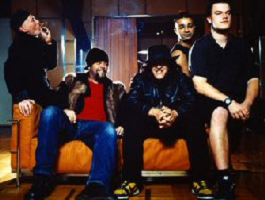 Wrath, rage, and fury are just a few words to describe the musical fire Killing Joke blasts. The quasi-metal band ruled since the 80s and was a key influence on industrial rock. Jaz Coleman, Kevin “Geordie” Walker, Martin “Youth” Glover, and Paul Ferguson’s iconic aggressive sounds influenced prominent bands that followed such as Metallica, Nirvana, and Nine Inch Nails. The London teens came together in an unconventional way: squatting. Through the trials and tribulations, Killing Joke has been through a few lineup changes, hiatuses in Iceland, and LSD-driven writing sessions.

Back in 2006, we had the chance to promote “Hosanas From The Basement Of Hell”. In the clip, Coleman appears in bone-white face makeup augmented by black lipstick leading the camera with fire and knives. The Killing Joke frontman leads the damned to a makeshift altar, where he performs a grisly sacrifice. The faces of the extras are decorated with greasepaint and corpse makeup, dressed in rags, and shot stretched on implements of torture. The Killing Joke is certainly no band to mess with.

Despite the song title, the video for “Euphoria” is not what it seems. The clip is a combination of a smooth Killing Joke performance mixed with strange animations and creepy “holy” footage. The flashing lights shine at every drum hit, and the graphics tell the story of condemnation of bling faith; we see people worshiping so intensely that seem “possessed” while the animated component showcases people glorifying a scary figure in the sky. In the end, the forest burns due to human greed, and a symbolic bird flies away from the chaos.