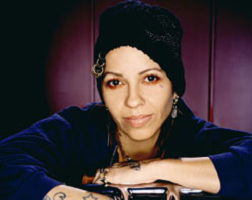 Looking at Linda Perry’s musical resume makes one wonder, what has she not achieved? She is the songwriting genius behind many radio pop stars like Britney Spears, Courtney Love, Gwen Stefani, Alicia Keys, and especially 4 Non-Blondes who she was also the lead singer of. She also launched the labels Rockstar Records and Custard Records in 2011 and began her route to fame by recording acoustic piano covers on her iPhone. Not to mention she has won two ASCAP awards for her songwriting and advocates for several charities to promote freedom of expression and individualism.

Although her brain works magic in pop music, she is a hardcore rocker at heart and often jams out to bands like the Velvet Underground and Led Zeppelin. In 1992, Perry showcased her flexibility and the power of her gigantic voice in “What’s Up?” with 4 Non-Blondes, which netted her a huge hit. Disappointed with the conventional pop style, Perry began on a solo career where her spirit was restless, and her ambitions were broader

We were lucky to work with Perry in 2005. “Fill Me Up” is a frank song about the consequences of alcoholism. Perry sits comfortably, jamming out in the studio. Surprisingly, the piano is missing several black keys. Suddenly, it becomes a literal fish tank, and Goldfish swim throughout as the singer strikes the keys.

The other video we promoted for Perry was “Freeway.” She is surrounded by friends onstage and is broadcasting her thoughtful message to an appreciative crowd on Haight Street in San Francisco. The footage is reminiscent of the psychedelic parties held in Haight-Ashbury during the Sixties.

Perry was also inducted into the Songwriters Hall of Fame in 2015. She currently owns and operates her own business, where she allows both men and women to have their voices and music heard. As a gay female musician, she truly understands the struggles of the industry. She works closely with the Los Angeles Gay & Lesbian Center and the Art of Elysium to contribute to their enrichment programs.