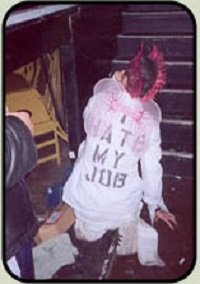 Here at HIP Video Promo, we’ve been working hard to promote music videos since the year 2000 and have over 3,000 videos under our belt. Due to our experience and expertise in the marketing world, we have promoted some of the best musical acts of our time. It’s important to give these artists a platform, and we have done that but it’s their talent that shoots them into instant stardom. Every Friday, we’ll be sharing a “Flashback Friday” video, where we get to reflect on one of our favorite videos from a few years ago.

One of our clients that we have had the pleasure to represent was at the forefront of the punk D.I.Y movement. Coming from New York City, Mindless Self Indulgence were founded in 1995 and helped inspire and create electro-punk that incorporated aspects of metal, punk rock, electronic rock, industrial, and neo-metal influences to create a sound with pure Marxist energy. Highlighted by their most successful track, “You’ll Rebel to Anything,” the band is constantly revolting against themselves, the music industry, their own genre while facing an internal battle within their own minds. They take punk to the next level with their pure ability to entertain while having excellent visual content for their music videos to add to their level of showmanship. Their music videos contain colorful imagery that compliments their electronic production, making them a timeless standout act. Their pure originality and punk rock attitude displayed on stage got them tour spots with legendary rock bands Korn, System of a Down, and Slipknot. Not only were they honored to tour with such celebrated rockers, they proved themselves to be on the setlist ten times over- revving up crowds to the point of complete and utter total takeover.

Mindless Self Indulgence are composed of Jimmy Urine, Steve Righ?, Lyn Z and Kitty as they come together to produce an overall concept of being your own God. Their unbelievably rabid fan base is rightfully deserved as they lead the misfits to find their own “Personal Jesus.” They are no stranger to religious themes and concepts throughout their discography making them self-proclaimed prophets with a demonic vengeful twist. This gives the listeners a sense of confidence and a firm trust within themselves as they shout, “wouldn’t take no for an answer, you f***ing b****.” They add a touch of comedy into all their songs that doesn’t overshadow the track but makes it even more punk, which of course includes oversexualized lyrics and visuals. Talent flows within the bands with Jimmy Urine’s monotone neo metal vocals, paired with a suburb band to compliment it- turning these outsiders into leaders.

Back in 2002, we were sent the music video for “Tornado” and we were blown away by the band’s pure originality. The video takes a look at their concerts- styled with big hair, colorful eyeliner, fishnets, and Catholic imagery. The crowd cheers for their zany, disorderly but organized dance moves transforming into chaos, felt by not only the band but also the audience as the energy moves within them.

MSI’s bassist Lyn Z, is actually married to the certified rock star Gerard Way, formerly the lead singer of the legendary My Chemical Romance. Even though she has a famous husband, she brings her own artistry to her own work without pulling too much from Gerard’s influences. Not allowing herself to be outshined, she can be seen on stage bending backward as she manages to pull off a perfect bass set. Entertainers thick and thin, they have managed to put out consistent albums throughout the years totaling seven studio albums including a number of remixes and live CDs to compliment their punk remastering sound. They released Frankenstein Girls Will Seem Strangely Sexy in 2000 and continuing to release consistent albums such as You’ll Rebel To Anything in 2005, If in 2008, Tighter in 2011, How I Learned to Stop Giving Shit and Love Mindless Self Indulgence in 2013 and their latest album PINK in 2015.

Check out their most famous and rebellious singles here to take a trip back to high school:

Mindless Self Indulgence were one of the most recognizable names in the early 2000s rock movement and it all started here at HIP. Lead Vocalist Jimmy Urine has stated, “We’re not gonna break up unless somebody dies” and he is a man of his word. They are currently taking a break and working on solo projects since they have been around for almost over two decades but they are looking forward to producing another record sometime in the near future, which I’m sure won’t be hard for them giving their experience, craftsmanship and expertise. Even when they die, they will sonically be around forever due to their influence on the punk and rock genres they helped revive and flourish.

Who sounds like Mindless Self Indulgence? No one. And that’s why they were able to make a name for themselves and give meaning behind their suicidal excess head banging raw ideas that branched and flowed into musical masterworks. Their insanity is highlighted and is morphed into a messy celebration that has been documented by their lengthy discography.

We’ve been dedicated followers of Mindless Self Indulgence since the beginning and helped shoot them to their rightfully deserved stardom, and we are ecstatic to have promoted one of the leaders of electronic rock. Truly original and unique, we got to hear their sound here first over at HIP Video Promo and you can never shut them up. We can’t wait to see what diverse artist becomes the next breakout star. Do you think your video has what it takes to be the next worldwide smash hit? Get in touch with Andy Gesner and the rest of the HIP Video Promo team by giving us a call at (732)-613-1779 or emailing us at info@HIPVideoPromo.com.