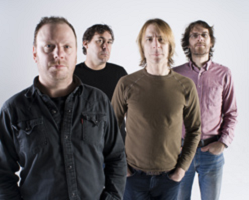 In the late 1980s and early 90s, Seattle was the place to be for grunge and alternative rock music. Formed in 1988, Mudhoney were progenitors of grunge, garage, and psychedelic rock even Queens of The Stone Age or the one and only Nirvana. While they never reached the commercial success that some fellow Seattle acts did, they proved themselves to be founding fathers of the Seattle grunge movement, inspiring countless other artists over the years.

In 2002, we worked with Mudhoney for the first time to promote their “Sonic Infusion” video. They’d just released their album Since We’ve Become Translucent, their sixth overall and return to Sub Pop. The Japanese sci-fi framing scenes from “Sonic Infusion” come tantalizingly close to something you’d call “slick” – and while it’s the featured track on the album, from beginning to end it’s solid throughout.

Six years later, in the summer of 2008, we had the honor of working with Mudhoney once again to promote their video for “Touch Me I’m Sick.” If Mudhoney kicked off the alt-rock revolution, “Touch Me I’m Sick” – originally a single in 1998 – was the shot heard round the world, inspiring and influencing countless other groups. In 2008, Sub Pop released a deluxe edition of their debut with the video to come along with it: Whitey McConnaughy, a prominent Seattle music videographer, made this semi-archival clip that finds the band in action. And while you might not actually be in the room, you’ll certainly feel like you’re seeing Mudhoney live in concert, as their energy absolutely explodes.

Mudhoney have released two more albums, Vanishing Point in 2013 and Digital Garbage in 2018. They’ve also continued performing regularly, including supporting Pearl Jam’s 20th anniversary in 2011 and joining Mogwai for All Tomorrow’s Parties ‘I’ll Be Your Mirror’ festival at the legendary Alexandra Palace in London. Check out www.Mudhoney.org to see what they’re up to!