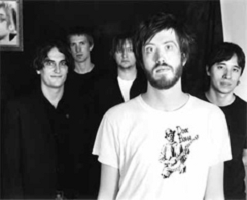 In 1998, Okkervil River began as a trio made up of New Hampshire native Will Sheff and some of his hometown friends that had relocated to Austin, TX with him, but the indie rock/ folk/ alternative country group’s lineup would change over the years. A successful self-release of their first EP Stars Too Small to Use led Okkervil River to play at SXSW. From there, they signed to prominent indie label Jagjaguwar and released Don’t Fall in Love With Everyone You See in 2002 and Down The River of Golden Dreams in 2003.

We have had the pleasure of working with Okkervil River to promote three separate videos, the first coming shortly after the April 2005 release of their album Black Sheep Boy. A concept album, Black Sheep Boy led to critical acclaim, multiple year-end best-of list spots, and even a profile in The New York Times. That summer we promoted their “For Real” video, a beautifully animated clip by Zak Margolis that matches the song’s emotional intensity.

Two years later, in August 2007, Okkervil River followed up Black Sheep Boy with their album The Stage Names – an album that quickly received praise from the likes of The New York Times, Pitchfork, Spin, and Entertainment Weekly.  That September we kicked off a campaign to promote the video for “Our Life Is Not A Movie Or Maybe”, the lead track on The Stage Names. The song itself is a total fireball, and in the hands of fellow Austinite Margaret Brown (who directed the Townes Van Zandt biopic Be Here To Love Me), the video is a further revelation, as the band play with an incisive fury.

Okkervil River continued their string of successful albums with The Stand Ins in 2008 and I Am Very Far in 2011 – and in addition to their continued buzz from top music outlets like Pitchfork, Stereogum, and Spin, it landed them a spot on Late Night With Jimmy Fallon, where they played “Wake And Be Fine” for the first time. This followed other national TV appearances, including NBC’s Late Night with Conan O’Brien and CBS’s Late Show with David Letterman. In April 2011, just ahead of the album’s May release, we promoted Okkervil River’s video for “Wake And Be Fine”. “Wake And Be Fine” resonates with classic Okkervil River charm and energetic instrumentation; on-screen, they perform against a white background that flashes the lyrics.

Now signed to ATO Records, Okkervil River released their ninth studio album, In The Rainbow Rain, in 2018. In April 2019 they also began celebrating more than two decades of playing live with A Dream in the Dark: Two Decades of Okkervil River Live, a series of 12 live albums that would be released digitally over the course of a year, telling the story of the band’s 21-year career. Check out ADreamInTheDark.com and OkkervilRiver.com to learn more!