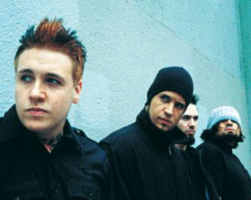 Formed in 1993 in Vacaville, CA, Papa Roach’s original lineup consisted of Jacoby Shaddix (lead vocals), Jerry Horton (guitar), Dave Buckner (drums), and Will James (bass). They entered their high school’s talent show, and while they didn’t ultimately win, the fire was lit. Soon, Papa Roach began touring in a van and independently releasing two EPs. James left the band and was replaced by Tobin Esperance, and eventually, signed with Dreamworks Records in 1999. Infest, released in 2000, became triple-platinum: the album blended hard rock with nu-metal and rap, with singles like “Last Resort” and “Broken Home” offering blazingly honest lyrics about topics like suicide, divorce, and emotional conflict. For the follow-up album, 2002’s Lovehatetragedy, they mostly strayed away from the rap sound while maintaining the nu-metal sound they’d become known for.

In the summer of 2004, we worked with Papa Roach and Geffen Records to promote the video for “Getting Away With Murder” from their album of the same name. Here, Papa Roach performs smack dab in the middle of a stock trading floor, where chaos has erupted. But it’s not just stock trading going on here… brokers undress each other in plain sight, as sexual interactions happen right then and there. Check out the Papa Roach “Getting Away With Murder” video below!

But the best way to experience a band like Papa Roach is live, and you can do that this spring: after touring Europe with Hollywood Undead and Ice Nine Kills in March, they’ll tour the US with Five Finger Death Punch, I Prevail, and Ice Nine Kills in April and May. Head to PapaRoach.com to see if they’ll be in your area!