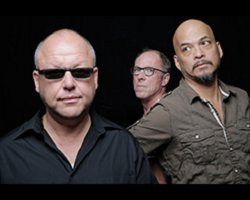 Music can be timeless, but a band’s physical presence is not always. PIXIES, on the other hand, have stayed relevant throughout the years. Take the concepts of surrealism and terrifying vices mixed with gritty guitars, unconventional solos, and pop hooks, and you get PIXIES’ song recipe. Their breakthrough in the 80s was marked as one of the most extraordinary rock sounds. Though PIXIES broke up in 1993, their music resonated with the generations to come. When the band reunited in 2014, the news was headlined everywhere. Before their breakup, PIXIES released four studio albums and after their reunion, released three more with the most recent being Beneath the Eyrie.

We promoted “Greens and Blues” in March of 2014, a hallmark PIXIES’ tune that proves their songwriting prowess as sharp and as relevant as ever. It teems with images of earthly landscapes, peaked by realistic/sci-fi Vonnegut extravaganzas, cosmic surrealism, and the sweeping expanse of the oceans.

Shortly after, we worked on “Ring the Bell” in September of 2014. The video plays with notions of nostalgia, revelry, and intergenerational communication. The pair raid an abandoned building for toys and tokens of the recent past, then in a sanctuary in the woods, the directors and their friends demonstrate that fun belongs to no particular era.

PIXIES just released an album a few months ago, meaning new music videos are coming. Their most recent is “On Graveyard Hill”, a perfect video to get us ready for Halloween. An eager 60s-era vintage groupie calls for her Uber-hearse to take her to a psychic shop where she becomes possessed and is sucked into an eternal hell. The fuse of flower power innocence and the terror of a bad trip is broken up by shots of frontman, Black Francis, singing to the camera wearing a pair of modern Ray-Bans. The psychedelia and vibrant color palettes restore PIXIES’ influence and status in alternative rock.