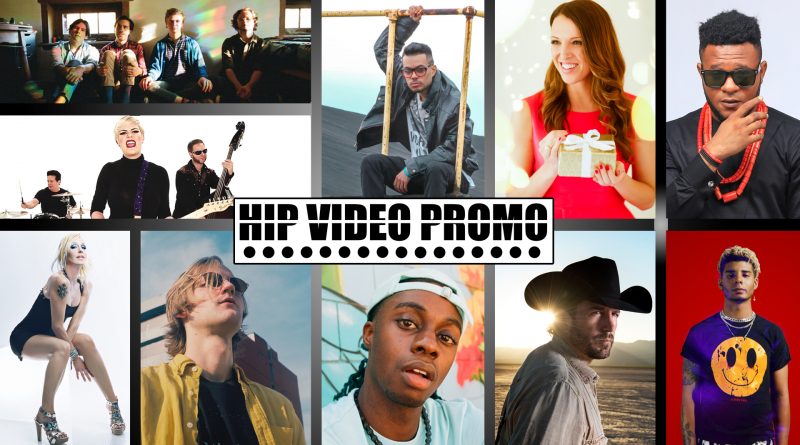 Music can make us feel a million different ways: it can get us in to the holiday spirit or pumped up for the dancefloor, it can make us cry and it can make us smile. We’ve got a bit of everything in our latest HIP Picks – Weekly Client Roundup- take a look at the videos above, and learn more about each clip by clicking on the links below.

“We Belong To The Night” Music Video: JES (EDM/pop)

JES is an award-winning singer, songwriter, DJ, producer, and label owner, and has been signed to Tiesto’s label Black Hole Recordings. An accomplished artist (she’s charted on SiriusXM and Billboard and has been nominated for three Grammys), she’s now launched her own label, Intonenation Records. For the “We Belong To The Night” video, she teamed up with director Ben Meredith,  and here, she shines bright as a beacon of light in a world full of darkness.

Although Marigold is the fourth album from Montclair, NJ indie-rockers Pinegrove, “Phase” comes as the band’s first music video. Directed by Colin Read, “Phase” blurs the lines between awake and asleep, as the video’s central figure aimlessly strolls through the city and his day, eventually coming face to face with the band.

Houston rapper TisaKorean is talented and approachable, sure – and he knows how to look fresh in Aeropostale.  But he’s not just a friendly face: his past video “Dip” has racked up over a million plays on YouTube and spawned a viral dance craze on TikTok, prompting a co-sign and remix from Lil Uzi Vert. He’s been praised by the likes of The Fader and Pitchfork; rap press have praised his debut album, A Guide To Being A Partying Freshman. As you’ll see in “AERO (Blow The Whistle)”, not only can he rap the praises of the brand, he’s got screen presence that can’t be taught.

With shows everywhere from Brooklyn’s Knitting Factory to Vermont’s Minus Zero Fest, and having shared the stage with the likes of Steve Aoki and Odesza, it’s no surprise that Eddie Grand is a walking party. “Slay”, his latest, is a real club banger, with a huge but subtle hook. He worked with director Ryan Metcalf to create a video that’ll have your eyes glued to the screen from the start… one thing is for certain, this party isn’t going the way we planned.

“Santa Bring My Baby Back To Me” Music Video: Brynn Stanley (Pop/holiday)

We’re gearing up for the holiday season and North Jersey adult contemporary singer Brynn Stanley has a video to suit the mood. Her take on Elvis’s classic “Santa Bring My Baby Back To Me”, from her Classic Christmas album, is as sweet as a batch of homemade sugar cookies. On a set festooned with holiday directions, Brynn waits for her beau to return… and her occasional acts of impatience are always endearing, as she gets ready to celebrate seeing her man coming home.

Following up “Crystal Ball”, Waldo Witt is back with a new video, “Carteret.” The Chapel Hill, NC artist knows how to make a video, and here, he ups the ante with a gripping story-line that borrows equally from dystopian and gangster cinema. Sefárdico’s clip presents a magic realism treatment on the US, one populated by a desperate and passionate multicultural youth defined by its opposition to the dominant power group, in this case the Kadabros gang. It’s a needle-drop into a deep drove, a visual that perfectly matches the gorgeously appointed, texturally sophisticated, harmonically rich, and sonically arresting track.

Fast-rising DJ ZIDIQ was born in Nigeria Lagos and finished school with a BSC in Economics. He is now signed to Anacaona Records, an American independent record label. “African Mama” is a spot-on example of his pioneering of the Afro Electronic Dance music genre, a mixture of African cultural styles with energetic beats that’s already garnering significant airplay across Nigeria’s top radio stations. The “African Mama” video is produced and mixed by Irish producers Brian Sheil and Alex Flood, and as we see energetic dancers complemented by the glow of the sunset, it’s hard not to get up on our feet!

Music City is a tough nut to crack, but soon after she moved there (at only 17), BREE was named RAW’s Nashville Artist of the Year. After doing three separate UK tours with The Parlotones, The Supersuckers and The Lottery Winners, she connected with now bandmates, drummer David J. Castello and upright bassist Maryk McNeely. Now back in the states, she’s released the albumNew Skin, which was produced by Justin Cortelyou (Paul McCartney, Taylor Swift, Alice Cooper, Ke$ha). “Damn, I’m Being Me Again” is a blast and makes no excuses. Director Casey Culver shot Bree and her band in all black, with an all-black backline, against pure white, and the effect is striking.

The land of the free wouldn’t be what it is without the brave men and women who protect what this country stands for and the people who inhabit it. In their patriotic country track “Twenty Two”,  named for the soldiers that take their lives each day, Danny Griego and KP Fitz show appreciation to those that risked their lives on the front lines of war and depression. Following a recently discharged soldier, the “Twenty Two” video hopes to show our nation’s military that they are loved and wanted in this world.  Danny Griego’s latest album is currently making its way up to the top of the Billboard 200. KP has recently made a musical appearance on the popular broadcast show Fox and Friends. Both artists have great things on the horizon and even more fantastic music on the way.

If you live in Detroit, you work for what you’ve got – and the ups and downs of a town like that can take a toll. It can get lonely. But misery loves company, and the emo rap scene is about to love Kid Pullen. “Shine From My Casket” may be the first time we’ve heard a rapper rhyme about fast cars and fly jewelry and NOT be bragging on it…. he’s hurting, and all these worldly possessions play a part in his planned demise. In J.L. Christopher’s accompanying video, an entire wall is covered with yellow caution tape, as if to prepare us for the painful, blunt confessional Kid Pullen is about to drop on us.

Motor City emo rap star on the rise Kid Pullen has shared not just one but two videos. The companion clip to “Shine From My Casket,” the clubby but no less dark “Can’t Help,” finds Kid navigating the chemical and sexual temptations of late nights wasted beneath the strobe lights.