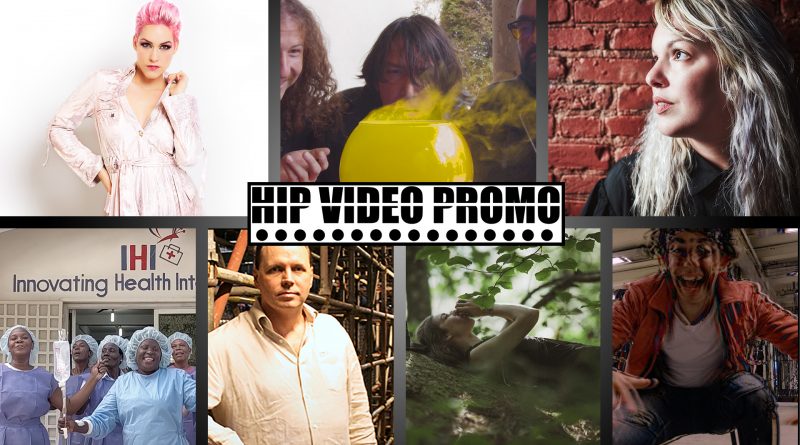 WordPress Image Carousel
From electronic-flavored pop to Americana-rock to gospel, great music comes with great stories and great messages. The new videos haven’t slowed down a bit! Our newest HIP Picks – Weekly Client Roundup is here- take a look at the videos above, and learn more about the clips by clicking on the links below.

With her brand new “Maybe” music video, electronic pop singer Tina Tara provides a cheeky solution to the subconscious fantasies we’ve all experienced: wouldn’t it be great if we could order a robot boyfriend or girlfriend from an online catalog? “Maybe” is the follow-up to two remarkable 2019 tracks: “Arriba” and “Worth It”, both of which were co-written by multi-instrumentalist Anthony Goldsbrough, whose credits include Bastille, Ed Sheeran, Hozier, and Olly Murs, and who is back in the producer’s chair for “Maybe.” In its first three weeks, the track reached #37 on the Billboard charts – an impressive feat for an independent artist.

With her first two EPs, Between The Creek and the Tracks (2014) and Light Dark (2018), Lauren Calve began making a name for herself. Already a mainstay at prominent local and regional venues, she’s also held her own on stage with the likes of Justin Townes Earle, Rhett Miller, and Sean Watkins of Nickel Creek. “Better Angels”, from the upcoming Wildfire EP, has taken on new meaning amidst the current global crisis; the video honors those of us out on the front line, from first responders to shelf stockers, letting them know they are not forgotten.

For the Many Lives EP, Howlin’ Whale has attracted a delightful variety of musicians: songwriters Fire Mist, Taylor Quinn, Kosmic Geckos bandleader Kavika G, funk bassist M.Cat Spoony, and jazz phenom Tyler Hammond have played their part. “Many Lives” is a deeply personal fusion of swamp rock, rustic folk, small-town blues, and heavy, earthy one drop rhythm, held together with Howlin Whale’s yearning voice and ethereal mouth harp. In the “Many Lives” clip, which she directed herself, we’re taken on a train ride with stops at the ocean, the deep woods, and the bogs.

Up-and-coming rapper Sean Joseph has lived in New York City (what better place to be to explore your dreams?), but he also lived in Mississippi and throughout the south during and after college, adding southern soul to his big city energy. He also puts his Haitian heritage on proud display, such as by showing a Haitian flag in his new “Whole Zaddy” video. “Zaddy” encompasses the hyper-sexualization of the word “daddy”, but with even more swag, allure and fashion sense. And after a long night of swooning girls at the club, he develops a fan base that can’t seem to let go – the girls who know that on a scale of 1 to 10, he’s an 11.

Accomplished electronic composer Antherius (Thomas Reynal) is based in Texas, but he understands the New York story. His clip for the haunting version of the theme song to the classic film Midnight Cowboy consists of magnificent shots of the city in a tribute and celebration. Legendary scorer John Barry won a Grammy for Best Instrumental Theme for the composition, and while Antherius isn’t the first to reinterpret “Midnight Cowboy”, we’re pretty sure you’ve never heard a version of the song that’s more sleek, radiant, or mesmerizing.

As we have recently and forcefully been reminded, there is nothing more important than good health – and in some nations, access to basic healthcare isn’t always easy to come by. Cancer treatment, in particular, can be extremely difficult to find, and the people who need care the most are often the last to get it. IHI – Innovating Health International – is here to help, tackling cancer and other chronic conditions in Haiti, Somaliland, and Malawi, focusing on women’s health in rural communities. The single “Celebre” is a benefit track to raise awareness and funds ($3, or two downloads of the track, covers a potentially life-saving cervical cancer screening and breast examination), and it was brought to life by a voluntary team effort led by Dr. Gail Granowitz, singer-songwriter Beth Blatt and renowned Haitian-American singer-songwriter and actress Malou Beauvoir. Steven DeGennaro’s moving clip takes us to a clinic in the developing world, but there’s nothing somber here: it’s full of life and healing.