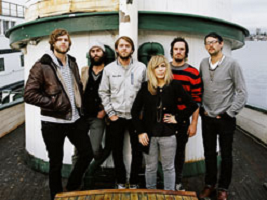 If The Head and The Heart traveled back in time eleven years ago to when they were playing Seattle bars, they would never imagine having garnered the amount of fame and success they have now. Their achievements are endless; they’ve played sold-out shows at Coachella and Red Rocks, and their albums Let’s Be Still (2013) and Signs of Light (2016) settled into Billboard’s Top 10 albums chart. The band themselves have made appearances on Jimmy Fallon and Cameron Crowe’s Roadies while their music has been featured on Sons of Anarchy and How I Met Your Mother.

Influenced by Americana, country-rock, and classic Beatlesque pop, the overall indie-folk band formed in 2009 but didn’t break into the mainstream until 2013. Yet their newest album, Living Mirage, is the poppiest and sleekest album yet. Living Mirage is a living testimony that The Head and The Heart have a strong foundation and can make it through the test of time. Right before the album, they lost one member to drug addiction, another to road burnout, and almost collapsed a few days into their first recording sessions and rehearsals for the new album. Drummer Tyler Williams states, “We had to destroy how we did things to allow each other to evolve,” proving their discipline and commitment to their synergy.

Sometimes we need a reminder to see the beauty in all things, especially our unavoidable sadness. “Lost in My Mind” was a video we worked with The Head and The Heart in 2011. Love, loss and introspection unfold, and the video follows suit featuring the band walking the snowy fields of a Northwestern night. With every second, the setting grows continually closer to night, but worry not: the darkness is replaced by aesthetically pleasing lights and lamps that reflect cozily off of the snow, proving that there is always beauty in darkness.

Nature once again is a significant theme in The Head and The Heart’s latest music video. “Honeybee” premiered in early 2020 and is as gentle as the sun peeking through the trees in the clip. Vocalist Charity Rose Thielen blends into her environment as the “honeybee” with her yellow hair and various yellow and black resembling outfits. She is in her natural habitat, prancing through the forest and lounging in the staircase. Suddenly, she is tricked by a bee catcher and is chased. The catcher has a change of heart and befriends Thielen; they then stroll through the woods together, holding hands.