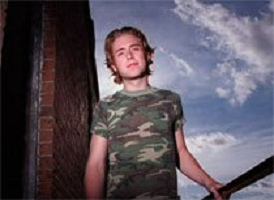 After his high school band broke up, Bryce Avary began performing acoustic shows around the Dallas-Forth Worth area. He self-released his first EP, The Rocket Summer (re-released as The Early Years EP by The Militia Group in 2006), in 2000, writing and recording every instrument himself. In early 2003, the first The Rocket Summer full-length album, Calendar Days, was released, full of songs that exuded happiness and enthusiasm.

We had the honor of working with The Rocket Summer to promote his video for “Skies So Blue” just a few months after the release of Calendar Days. In Darren Doane’s video, Avary strolls around his suburban neighborhood strumming his Telecaster, singing about the person who lights up his world. It’s bright, airy, and colorful, energetic without being frantic.

The Rocket Summer’s sophomore album, Hello Good Friend (2004) was a breakthrough for Avary, as it peaked at Number 26 on the Billboard Heatseekers chart. His major label debut came in 2007 with Do You Feel on Island Def Jam, which hit Number 44 on the Billboard Top 200; the follow-up, Of Men and Angels (2010) debuted at Number 1 on iTunes. And while Avary has always made heartfelt songs with a signature positivity, 2016’s Zoetic – which took an inventive, creative approach – received some of his best reviews yet from Alternative Press, New Noise Magazine, and Substream Magazine, among others.

Most recently, The Rocket Summer released Sweet Shivers in the summer of 2019.  Music videos have been released for several of the songs on Sweet Shivers; notable among them is the official fan-made video for “Gardens.” The “Gardens” video was directed and edited by Stephanie Mishelle Ard with cinematography by Taylor Camarot. Avery Merrifield stars as a man who wakes up, alone and confused, in a desolate field, before running away from some unseen force that seems to be chasing him.

Written by HIP Director of Marketing and Communcations Molly Hudelson.