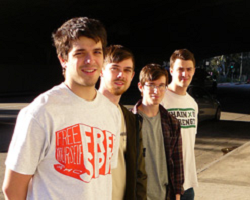 Back in 2003, Ned Russin (bass), Ben Russin (Ned’s twin brother, drums), and Jamie Rhoden (guitar/vocals) formed Title Fight in their hometown of Kingston, PA. Shane Moran joined on guitar in 2005 and soon after, the band released two demos. Title Fight were active in their local, DIY music scene before touring with Fireworks and Set Your Goals in 2007. This led to their signing to Run For Cover Records in 2008. Their first RFC release was The Last Thing You Forget 7″ in June 2009. Although they started off as a hardcore band, Title Fight eventually brought in influences like alternative rock and shoegazing, transitioning to a more melodic hardcore sound.

After a few more years of touring (with New Found Glory, Bayside, Senses Fail, and more), Title Fight signed to SideOneDummy Records in early 2011. That summer, they released their fist full-length album, Shed, which was produced by Walter Schreifels (Gorilla Biscuits, Quicksand, and Rival Schools) and engineered by Will Yip at Studio 4 in Conshohocken, PA. Beginning in June, we worked with them for the first time to promote the “27” video. Filmed on a VHS camcorder, “27” shows the band performing in a house with enough bad luck omens crossing their path that anyone would be freaked out.

That October- when they were featured on the cover of Alternative Press as one of the artists on that year’s AP Tour – Title Fight followed up “27” with the music video for “Shed”, the album’s title track. This time, they’ve cranked it up to 11 for a track reminiscent of some of hardcore’s best. The “Shed” video is pleasantly lo-fi, as they play – and wreak havoc – in the words.

Title Fight released their second album, Floral Green, in September 2012. This time, they recorded with Will Yip at Studio 4. In addition to spots at top fests like This Is Hardcore, Sound and Fury, and Bamboozle and tours with Senses Fail and Bayside, SPIN proclaimed that they “are going reshape the entire punk genre with their 2nd full-length album, Floral Green“, while NPR said that the band “its the sweet spot between the heartfelt, road-trip-proven pop-punk of Jawbreaker’s Dear You and the melodic post-hardcore of Hot Water Music.”

We worked with the band once more in October 2012 to promote the “Secret Society” video. Directed by Hannah Roman alongside the band, “Secret Society” introduces the viewer to a world of self-destruction, chaos, and even murder in one young girl’s life. Once again shot on VHS camcorder, “Secret Society” has a Carrie-meets-indie-rock-meets-home-movie vibe. No chance you’ll be able to pull your eyes away.

After the Spring Songs EP in 2013 on Revelation Records, Title Fight signed to ANTI- Records in 2014. They released their third album Hyperview in 2015 and continued to tour constantly in the US and Europe Although they’ve played a few select shows since then, they’ve been mostly inactive since 2016. In 2017, Russin launched his new project, Glitterer, with the eponymous EP released on Bandcamp that August. The follow-up, Not Glitterer, came five months later on Anti-, with the debut full-length Looking Through The Shades in the summer of 2019.  Check out Glitterer’s “Destiny” video below!