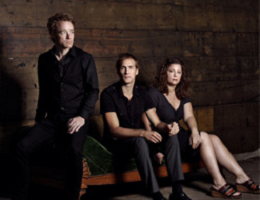 Way back in 1993, Low formed as Alan Sparhawk (guitar and vocals) and John Nichols (original bassist) began playing quieter melodies in front of crowds in Duluth – who, at the time, where used to grunge and post-punk… that is to say, louder melodies. They soon recruited Sparhawk’s wife Mimi Parker on drums, releasing their debut album I Could Live In Hope on Vernon Yard (Virgin Records imprint) in 1994. They released two more records on the label, and after two releases on Kranky, they signed to legendary independent label Sub Pop in 2004. Their first Sub Pop release, The Great Destroyer, came in 2005, and from their, they continued to mix it up and experiment with their sound.

In May 2011, we worked with Low to promote their “Try To Sleep” video. They had just released their ninth full-length album C’Mon, and guess who was a fan? The one and only John Stamos – known to many as Uncle Jesse in Full House – is not only a fan of Low, he’s a friend of C’mon co-producer Matt Beckley. C’Mon was Low’s third album for Sub Pop, and it came on the tail of same major success: the legendary Robert Planet covered two of the band’s songs on his 2010 solo album Band of Joy and even earned a Grammy nomination for his take on Low’s “Silver Rider” (from The Great Destroyer, 2005). John Stamos and a beautiful woman portray a couple of actors filming a driving sequence in an old-style film set. It’s a dreamy, illusionary clip that’ll leave you feeling juuust a bit uneasy.

A few months later, in September of 2011, we worked with Low again to promote their video for “Especially Me”, the follow-up video. C’Mon was praised by the likes of Pitchfork (who named “Especially Me” as their favorite track on the record), The Guardian (whose 4/5 star review called it “an invitation too intriguing not to take up”), BBC Music, and SPIN.  Though they call Duluth, MN home, for “Especially Me”, Low headed to the one and only New York City. Here, Mimi rides the subway, the slower and more melancholy mood of the song perfectly shown on screen. It’s an intriguing juxtaposition, the slower, more melancholy mood of the song with the urgency of NYC, but in its own way, it’s fitting.

Low have since released three more albums on Sub Pop: The Invisible Way (2013), Ones and Sixes (2015),  and Double Negative (2018). They have also had several songs placed on television shows, including HBO’s Eastbound & Down (“Blue Christmas”), Netflix’s Orange Is the New Black (“Especially Me”), Netflix’s 13 Reasons Why (“Dancing and Blood”), and FX’s Devs (“Congregation”). To see what they’re up to now, check out their Twitter (@LowTheBand) or www.chairkickers.com.