Heavy riffage with Only Living Boy’s “I Hear Music”

Ethan Gold with 2 videos from the most dangerous album in indie rock! 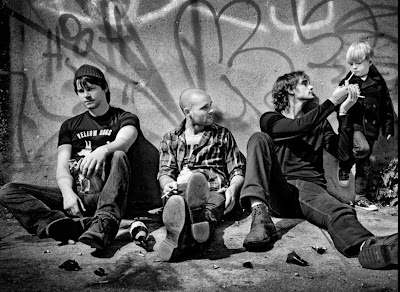 “Only Living Boy eats raw hearts for breakfast,” so claims The Audio Perv blog in their SXSW feature on the band. This all killer, no filler three-piece have taken a hard walk down the path traveled by the greatest of the rock ‘n’ roll forefathers. On their self-titled debut in 2008, the band laid down the foundation for their sound by planting their blues rock roots firmly into the ground. Fusing modern rock music with a heavy blues base, Only Living Boy assaults with tight riffs served over nasty, hip-shaking, head-nodding grooves. They also followed it up with some tried and true touring across our great nation. Their sophomore album, Hide Nothing, which just hit the digital shelves, is produced by Paul Ritchie of Roadrunner recording artists (and fellow N.J. rockers) The Parlor Mob. This album finds the band meaner, leaner and louder, despite what their Simon and Garfunkel-inspired name might suggest. The Aquarian recently dubbed the record as comparable to newer Pearl Jam stuff in its bluesy quality and complemented the band on their “excellent songwriting skills.” Pop Break also boldly raves that Only Living Boy “have the tunes, the talent and the charisma to bring the power trio back to its rightful place of prominence.” “I Hear Music” is a music video that shows off exactly what happens to any listener when they hear the heavy riffage of Only Living Boy.