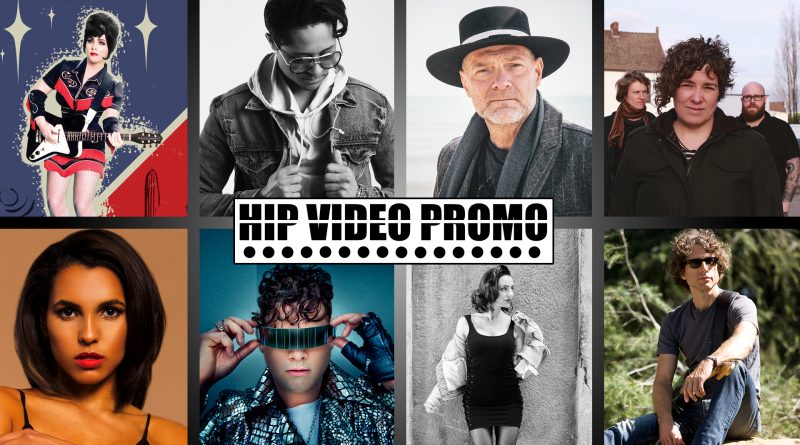 Music has a message. Sometimes songs tell stories about a past love, sometimes it’s a wake-up call to society at large – but the best songs always have something to say. Here’s our latest HIP Picks – Weekly Client Roundup- take a look at the videos above, and learn more about each clip by clicking on the links below.

For several decades now, Josie Cotton has never stopped pushing buttons, scaling obstacles, and making great pop music. Twin ’00s albums Movie Disaster Music and Invasion Of The B-Girls explored Cotton’s fascination with vintage B-movies, and the clip for “Ukranian Cowboy” picks up right where she left off. Here, she appears in a replica ’60s B-movie poster, and the costumes and performances are straight from the seamier side of the motion picture industry.

Belgium’s Down The Lees began as a solo project for Laura Lee Schultz, but has since evolved to a full band. Bury The Sun, their latest, is the first Down The Lees LP with a live full band. In “Antiseptic Heart”, director Sam Baguet shows the band playing to a crowd of no one. Baguet cleverly alternates between muted, desaturated tones for the verses, and stark black and white for the harsh, gorgeous choruses, adding to the mood and mystery of the track.

New England artist Belle Vex is a beloved member of the HIP family. The young electro-pop singer has been gaining traction, and his latest clip “Cool,” he pauses to consider the pleasures – and perils – of the celebrity he’s on the cusp of attaining. Belle VEX and director Boy Vano are students of modern pop, and “Cool” is full of allusions to the recent clips by The 1975. Just like Matt Healy, Belle VEX is a pop singer with a full and legitimate critique of the fame chase.

The things that Les Stroud shows us in the gorgeous – but frequently graphic – clip for “One Giant Farm” aren’t always easy to see, but that’s exactly the point. He believes we need to have an honest conversation about what’s happening to our oceans, and the video also celebrates organizations and individuals who are fighting to save the oceans, including Dolphin Project and Sharkwater Foundation documentary filmmaker Rob Stewart, and Sea Shepherd. Legendary rock-and-roll guitarist Slash was so moved by the mission that – wanting to help bring awareness – he played guitar on the track. “One Giant Farm” isn’t easy to watch, but it’s important to take in.

Canadian singer-songwriter Vita Chambers is a woman of many talents. Her single “Fix You” went gold in Canada, and she even opened for Justin Bieber on 27 shows of the MY World Tour. “You Should Know,” the lead song from the EP VITA, is a break-up song full of conviction. Together with co-director Jeffrey Nye, she’s created a clip that displays visual and aural mood, with tricks of light sprinkled throughout.

Channeling icons like Robyn, the late Avicii, Armin van Buuren, Gaga, and Freddie, Velvet Code knows that the best thing you can ever be in life is yourself. His single “Get Outta My House” stayed on the Billboard Dance Music Charts for 15 weeks and peaked at #19, and his legendary hit “Say You Love Me” was played on The Hills and Jersey Shore.  “Mary Offered Ladybugs and Love Yous”, the second single from his album Dreamer, is like an interstellar journey and a head trip all in one. On screen, an otherworldly modern dance duo performs in front of him, as portraits of heroes of equality and bravery flash on the screen.

From Southern California to Europe to everywhere between and beyond, Natasha Jane Julian is proof that pop music is an international language. “Mechanical Heart” is her latest collaboration with Grammy-winning UK producer Dom Morley (Kate Walsh, The Versey, Amy Winehouse). Video director Zachary Denman is a Londoner to the core, and he makes his city one of the stars of the “Mechanical Heart” clip.

“Everything I Ever Wanted” Music Video: David Haerle (Rock/instrumental)

With half a dozen videos we’ve promoted together, David Haerle is another beloved returning member of the HIP family. “Everything I Ever Wanted” is the latest from his debut album, Garden of Edendale, and it stands out as an intricate instrumental performance. Directed by Sabrina Doyle, the “Everything I Ever Wanted” video shows Haerle and his bandmates in studio, riffing off each other with perfect craftmanship.