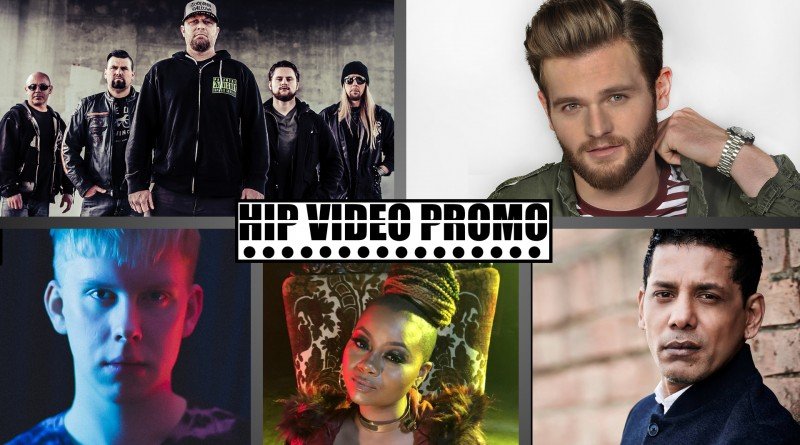 March has almost come to an end, and spring is officially on its way. The flowers haven’t begun to show but the temperatures are rising and we’re all ready for sunnier days! The hustle and bustle hasn’t slowed down for even a moment here at HIP HQ, and we’ve got new artists ranging from metal to rap to everything in between. The newest HIP Picks – Weekly Client Roundup video gives you the low-down on some of our current projects, and we’ll tell you a little bit about each one below.

With the video for “Chaos”, Seattle’s masters of destruction Arisen From Nothing showed off their lethal brand of metal, but with their new video for “Better Off Dead”, they bring the sonic rage to a live setting! Frontman Jessie Brigham, guitarists Troy Elmore and Steven Pontius, bassist Eric Hanson, and drummer Brandon Fuller have teamed up with Montreal-based label Collective Wave Records for the release of the hard-hitting album Broken last year. “Better Off Dead” showcases Arisen From Nothing in their natural habitat, with a killer live show, a crowd of excited fans, and a commanding stage presence.

An artist’s appearance is important, and showmanship and instrumental talent are critical; but real music fans know that songwriting is the lifeblood of the industry. Brandon Bonine learned from jazz greats and took inspiration from his father’s record collection; he’s been writing songs since he was only 13, and each one is like a letter from an old friend or a drive down a familiar road. Bonine’s latest single “Only With You” takes the mid-western heart of soul, the sensibilities of pop-rock, emotive songwriting, blues-inspired guitar playing, and hip-hop-influenced beats; it’s a fitting track to tease his forthcoming debut album Warrantied Worries (due out later this spring). The “Only With You” video sees him paired up with a female protagonist, enjoying the alluring, sexy landscape of tropical Florida. The message is clear: any picturesque place makes a lovely travel destination, but enjoying it with the right person makes it even better.

From a childhood spent in football and BMX, to a fashion design and manufacturing business when he was 17, to a 12-year career in kickboxing, Ali Jacko has the heart of a fighter. And now, this fighter is preparing to take on an opponent he’s never seen before: the music industry. Jacko is applying his fighter’s passion to his music, with plans to release a total of 11 new songs and videos this year. Up first are the ultra-personal “I Found Love”, the sun-kissed “Only Thing I See”, and the blue-collar anthem, “Working Man.” Though each video offers a different perspective to the artist, Ali Jacko’s signature gritty vocal style shines through in each one, and together, they begin painting a picture of what this inspiring musician will grow to be.

Born to a young mother in Baltimore, Nefertiitii refused to become a statistic; now, she’s one of the most talked-about rappers to come out of the city. Nefertiitii doesn’t need to ask for attention; her music demands it, and her latest track “Motives” (ft. Ron Dreamz) proves that she’s here to stay. The “Motives” video shows her in a pure image of power, sitting on a throne and walking across a money-covered floor, interrogating men who are tied up. One thing is for sure: Nefertiitii is not one to be taken advantage of.

Whether you’re a public figure or on a first date, first impressions are everything, and the same is true for musicians. Carl Gränsmark, better known as Whooda Thunk, comes from the heart of Sweden, and with his new single “Used To”, he’s ready to make his most important first impression to date: his American debut! Whooda Thunk has cultivated a unique perspective and sound in contemporary rock that’s both exuberant and dream-haunted. The video for “Used To” features Carl and his musical partner-in-crime Rickard spitting each line like it’s their last, delivering each word with the kind of genuine sincerity our world needs.