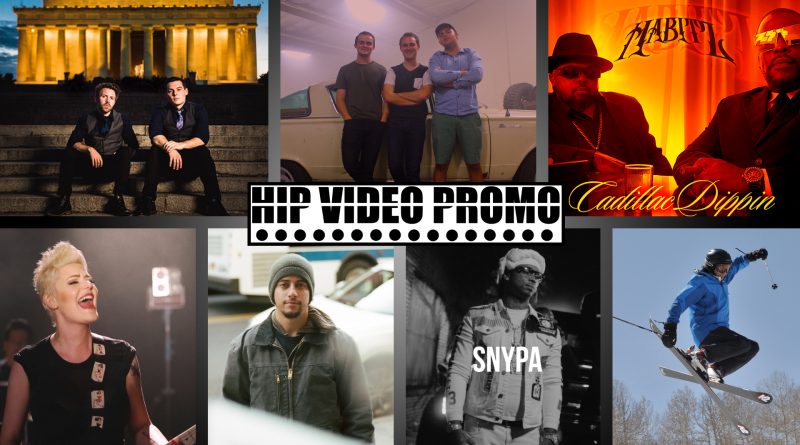 Two weeks in to January, we are rocking, rolling, and back at full speed here at HIP HQ. Our newest HIP Picks – Weekly Client Roundup is here- take a look at the video above, and learn more about the clip by clicking on the links below.

Last summer Broke Royals released their second album Saint Luxury, and it’s already been lauded by outlets like The Washington Post and No Depression. Following the videos for “Saint Luxury” and “Born to Break”, they’re back with the clip for “Love & Tatters”, a song that asks the question: can love really conquer all? Premiered on New Noise Magazine, director Scott Hansen shows us a love story that builds to a sudden, disturbing climax – all while the band are rocking out.

Orange County native Trent Hankinson began Aqua Seca, his new solo music project, in April 2019 – though he’s been playing drums since he was five. He’s the sole creative force at play here, writing and playing all the parts on Aqua Seca’s recordings (Greg Calbi of New York’s Sterling Sound masters everything). Leading up to the album Neural Stereo, Aqua Seca premiered the video for “Don’t Care” on New Noise Magazine. Filmed on the Salt Flats in Utah, it’s clear our protagonist is going on a journey… but where, pray tell, is he headed?

From a small town in Oregon to her current home in Nashville, BREE is an artist that knows how to make a statement. “Broken” follows “Damn, I’m Being Me Again” as the second single from the new LP New Skin. Directed by Casey Culver, the “Broken” video lets BREE and her killer band show off their impressive live show. They’ve already headed to the UK for tours with The Supersuckers (Acetate), The Parlotones (Gallo), and the Lottery Winners (Warner Brothers)- leaving fans in awe at every gig.

KNITWIT and Trazel connected back in 2015 when KNITWIT signed Trazel to his label ThugFace Records; now, the two are making music together as HABITZ. Their music video debut, “Cadillac Dippin”, brings a timeless, early-90s vibe to the modern hip-hop masses. Directed by KNITWIT and Gary Ruff, the video opens with them rolling up in an Escalade. They pop champagne poolside and take in the nice views, but the real luxury is the lady they can’t get enough of.

True to his name, Snypa has been dropping singles that seem to come from nowhere and snap heads back. “That’s It” is doing the ATL underground proud, having already gotten love on BET Jams. Director MI Visuals, aka The Pictureman, keeps the footage raw and gritty in the black and white clip for “That’s It” – the film flickers throughout, giving the whole production an entrancing, narcotic feel that matches the music.

Fusion is the future, and no one knows that better than Altuz, who blends delirious rhymes, swaggering country, and rock riffs on his recent LP Guitars & 808s. But “Altuz Baby” is no-holds-barred hip-hop, that puts his flow on display. In the “Altuz Baby” clip he heads to a dive bar to perform, in front of a crowd of… himself?

Before he picked up a microphone to rap, Altuz was a video director, and that’ll come as no surprise to anyone who watches his clip for “Bitchin.'” “Bitchin'”, the latest single from Guitars & 808s, is a fantastic crossover between country, rock, and rap. On screen, he and his crew are deep in the country, rapping with the fluidity and confidence that have always been his hallmarks.

Fiercely independent before it was cool, Mark Davison – formerly a founding member of Cubic Feet and now the frontman of Nuke the Soup – knows what it means to make a statement. The band’s 2018 album Deeper makes plenty of statements – but “Feed the Fire” focuses on some of life’s craziest adventures: extreme sports like skiing, windsurfing, and kiting. Davison is a participant in all three of these sports, but for the “Feed the Fire” music video, he’s focused on stand-out athletes from around the globe, one from each sport: professional ski guide Kieren Gaul (Rossland, BC); windsurfer Andy Pusch (Cabarete, DR); and professional kiter Georgina Monti (Cabarete, DR).