Maximo Park is highly popular in the U.K.! 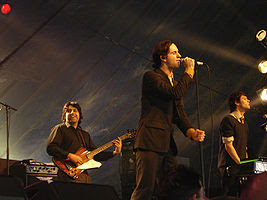 Maximo Park’s May tour has been completely sold out! This marks them as a band who’s soared in popularity among U.K. listeners. Maximo Park’s album, Quicken The Heart, also charted at number six on U.K.’s charts, creating even more of an din.

Maximo Park, formed in 2000, are influenced by the electronic and punky band Wire, as well as many of the indie greats, like The Cure and Joy Division. They provide fun and funky art rock to head bob to, and are uncompromising in their pursuit of musical excellence.