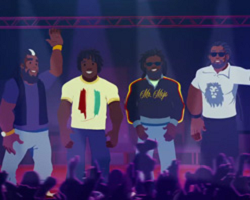 Ahh, the holiday season! The year 2017 is drawing to a close and as thrilled as we are to celebrate the most wonderful time of the year with our family, we’re also exceedingly thrilled to take a look in to 2018. As champions of underground, alternative, independent, and up-and-coming artists year-round, there’s nothing more fulfilling than seeing our clients get recognized and adored by the world at large. The music industry has several awards shows each year but perhaps none are more prestigious and notable than the Grammy Awards, and we’re thrilled to announce that two of our clients have been nominated this year! Morgan Heritage has been nominated for Best Reggae Album for Avrakedabra, and The National has been nominated for Best Alternative Music Album and Best Recording Package for Sleep Well Beast.

Known as the Royal Family of Reggae, the members of Morgan Heritage are the children of the great Denroy Morgan, a pioneer of the style and legendary innovator. Success and musical prowess must run in the family, because now Morgan Heritage are becoming legends in their own right: their 2015 effort Strictly Roots won the Grammy Award for Best Reggae Album. Dubbed “history in the making” by Huffington Post, Avrakedabra is proof that these reggae legends can connect with a contemporary pop audience as well. The video for “Reggae Night” shows the Morgan family maintaining their roots in both New York and Jamaica, but the real action in the clip takes place inside a reggae club, where the members of Morgan Heritage are seen for the heroes they are.

Since their 2001 self-titled debut, The National have had a regular output of transformative, gripping albums, reaffirming time and time again their status as masters of the alternative / indie rock genre. Their seventh studio album, Sleep Well Beast, was released on September 8, 2017 via 4AD. Produced by guitarist / keyboardist Aaron Dessner with co-production by guitarist Bryce Dessner and vocalist Matt Berninger, it was one of the most anticipated albums of the year. The video for “Day I Die” features a simple concept, and centers around a time-lapse video of the band during a sound check with wildly creative and truly mesmerizing visual effects.

You can see the full list of Grammy nominees here. The 60th annual Grammy Awards will take place on January 28, 2018 at Madison Square Garden in New York City. It’s the first time in 15 years that the awards have been held in the Big Apple, and as residents of the nearby Garden State we’re all thrilled to see such a major musical event right in our backyard.

What are your thoughts on this year’s Grammy Award nominations? Let us know on Facebook or Twitter!