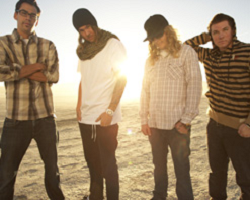 The Dirty Heads were founded in 2006, after Jared “Dirty J” Watson and vocalist/guitarist Dustin “Duddy B” Bushnell met at a high school party and decided to collaborate, blending Bushnell’s rap roots with the reggae and punk influences prominent in Orange County, CA. They connected with producers Steve Fox and Stan Frazier (of Sugar Ray), and their debut album Any Port in a Storm featured collaborations with everyone from Beatles collaborator Billy Preston to DJ Tippa Ire.

In the fall of 2008, right as they released Any Port in a Storm, we promoted The Dirty Heads’ video for “Stand Tall.” Although the “Stand Tall” video doesn’t actually start on the beach, it’s clear from the opening scene that they’re ready for some sunshine and waves. We met up with the band soon after to film this HIP Clip, where they talked about creating the right vibes at their shows, and how they brought that spirit to the screen in “Stand Tall.”

Check out the The Dirty Heads HIP Clip below:

If the cold weather has got you down, warm up and feel the sunshine vibes in the “Stand Tall” music video!