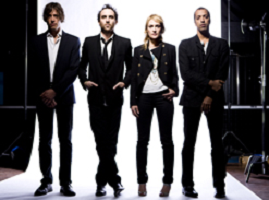 Here at HIP Video Promo, we’ve been working hard to promote music videos since the year 2000. It’s important to us to help independent artists get the recognition they deserve, and it’s exciting to be on the ground floor with artists that become household names (and with over 3,000 videos under our belts in 18 years, there are quite a few). Every Thursday, we’ll be sharing a “Throwback Thursday” HIP Spotlight / HIP Clip , where we get to reflect on one of our favorite interviews from a few years ago from our trustworthy clients.

We are throwing it back to one of the best commercial bands of the late 2000s. You have probably heard their songs all over TV and the radio as we gear up to plunge into this indie-rock quartet. Described as edgy and cool like MGMT and as radio-ready as The Shins, Metric is not afraid to ride out their impulses and take on brave sonic experiments. With a combination of rock, pop, and new wave, they have a distinct sound that can never be duplicated. Going where others have never dared to go before, Metric is composed of Emily Haines (vocals, synth), James Shaw (guitar), Joshua Winstead (bass) and Joules Scott-Key (drums). Starting in 1998 in Toronto, they have crafted their unique sound for 15 years living by their mission statement, “Life is beautiful. The world is cruel. Music still matters.”

Listen to “Help I’m Alive” to remember their influence in 2008:

Lead vocalist Emily Haines bends her appearance with her distinctive singing, allusive and poetic lyrics, and stunning on-stage outfits. With her intense presence on and off stage, she lures her listeners to join her world which is not for the faint of heart. Playing with synthesizers, she challenges listeners to figure out what’s human and what’s artificial. Finding the balance with technology, the band doesn’t solely rely on production elements as they lead their songs with acoustic guitar. Being the change in music they want to see in the world, they turned down multiple recording contracts for the sake of their creative integrity. Extremely authentic, they often romanticize this time in their life without falling into nostalgia as they continue to bend the status quo.

Diving deeper into the minds of Metric, in 2009 we had the honor to interview our highly regarded client with one of our best HIP Clip interviews to date! Glowing with life, they talk about their music video, “Gimme Sympathy” which was released on March 23rd, 2009.

Filming the “Gimme Sympathy” video in only one take, the shot is nearly flawless. They sat down to discuss their vision and how they created and executed their idea tastefully. Describing it as an “epic little piece of emotion”, the song narrates their intimate adventures on the road. Grinning from ear to ear with excitement, the band knew they created something that was indispensable.

Metric aren’t all talk either. Their album Fantasies made the Top 100 in the U.S. and hit #6 in Canada, and “Help, I’m Alive” reached #21 on the Modern Rock Charts and hit # 1 in Canada. The band also took the top position on the Billboard Heatseekers chart and held its position in the indie Top Ten for weeks. They have a loyal following as well. The band has performed at festivals across America including Coachella and All Point West, as well as embarking on tours in Europe and all over the globe. Their music also perfectly compliments film and they have been apart of multiple soundtracks. Their resume is loaded with appearances from Grey’s Anatomy, Entourage, The Vampire Diaries, Yo Gabba Gabba!, Late Show with David Letterman, The Originals, VH1 Divas, Arrow, Miss Representation, 90210, Scott Pilgrim vs. the World, The Twilight Saga: Eclipse, House, Zombieland, and One Tree Hill.

With six studio albums and seven EPs in their arsenal, Metric is still rocking out till this day under the coat of multiple awards and accomplishments. When we sat down with them in 2009 we knew these humble rockers were creating something bigger than themselves. From a coffee shop to the big screen they wave the flag for creative expression. Being true to their authentic selves, it distinguished them as innovators in a time of technological advancement while still remaining raw.

We’ve been big fans of Metric for a long time, and we can’t wait to see what budding artist becomes the next break-out star. Do you think your video has what it takes to be the next worldwide smash hit? Get in touch with Andy Gesner and the rest of the HIP Video Promo team by giving us a call at (732)-613-1779 or emailing us at info@HIPVideoPromo.com.