The Blind Boys Of Alabama “Free At Last” 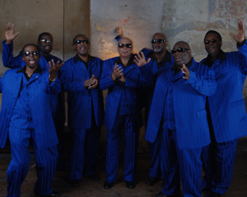 Best wishes to all of my terrific programming brethren. It’s Andy Gesner and the staff from HIP Video Promo bringing you the newest video from some true giants of the music world. The Blind Boys Of Alabama are a virtual repository of musical history: they’ve been performing since the 1930s, and their catalog reflects their deep engagement with nearly every trend that has influenced the American popular song. During their remarkable seven-decade run, they’ve sung blues, rock, soul, pop, standards, spirituals and jazz; they’ve covered Tom Waits and Pete Seeger, and collaborated with Ben Harper, Peter Gabriel and The String Cheese Incident; they won a Grammy Award in 2003 for their stunning set of Christmas favorites (Go Tell It On The Mountain). But their hearts have always belonged to gospel. No matter what songs they’ve turned their voices to, the Blind Boys Of Alabama have stayed true to their roots; in fact, even when they’ve devoted themselves to resolutely secular music, their eyes are still fixed on the heavens.

Take, for instance, their latest set. Down In New Orleans, their upcoming set for Time Life Music, is a deep and powerful engagement with the storied musical traditions of the Big Easy. The Blind Boys come to this project not merely with a wealth of knowledge of the city’s history – they’ve got some talented friends there, too. Drummer Shannon Powell, bassist Roland Guerin, and pianist David Torkanowsky are New Orleans stalwarts and local legends, and they provide spirited backing tracks for the singing group. Other Crescent City heavy-hitters drop by for high-profile guest appearances: Allen Toussaint, the Hot 8 Jazz Band, the Preservation Hall Jazz Band. But the focus here is on the veteran singers, who lead their musicians through a set of breathtaking songs that are, regardless of content, thoroughly devotional in spirit. Some of these cuts are straightforward gospel: “I’ll Fly Away”, “I’ve Got A Home”, “Down By The Riverside”. Like Toussaint’s recent collaboration with Elvis Costello,Down In New Orleans feels like an ardent prayer for a great American city that has fallen on tough times.

To support the collection, the Blind Boys will be appearing at New Orleans’s famous Preservation Hall (backed by the Jazz Band, of course) later this month. Indeed, the vibrant clip for “Free At Last” – a song with great contemporary relevance – suggests that the group is both familiar with and comfortable on Bourbon Street. The video opens with an inspiring shot of the singers, decked out in bright red suits and walking arm in arm through the French Quarter. Like the brightly-colored buildings and wrought-iron terraces, the Blind Boys look a natural part of the district. But if they confined their visit to Preservation Hall, Bourbon Street and its environs, they wouldn’t really be visiting New Orleans. Subsequent shots find the Blind Boys of Alabama in the wards most affected by the storms. The camera pauses for a moment by a Habitat For Humanity sign; later, we see the reconstruction in progress. The message is clear: music and faith built this city, and those same forces can heal it

We’re thrilled to have the opportunity to work with Robert Baum and Mike Jason at Time Life Music and Sue Schrader at Blind Ambition Mangement to bring you this inspirational new video. They’ve been kind enough to hook us up with plenty of copies of Down In New Orleans for all of your on-air giveaway needs, so please don’t hesitate to be in touch if you’d like to get your hands on them. If you need more info, call Andy Gesner at 732-613-1779 or e-mail us at info@HIPVideoPromo.com. You can also visit timelife.com/music or blindboys.com to find out more about The Blind Boys Of Alabama.