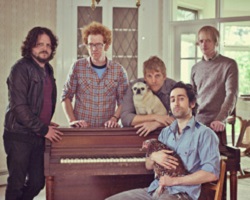 Here at HIP Video Promo, we’ve been working hard to promote music videos since the year 2000. It’s important to us to help younger and independent artists get the recognition they deserve, and it’s exciting to be on the ground floor with artists that become household names (and with over 3400 videos under our belts in 20 years, there are quite a few). Every Friday, we’ll be sharing a “Flashback Friday” video, where we get to reflect on one of our favorite videos from a few years ago.

Portland, Oregon alt-country group Blitzen Trapper self-released their first three records, which helped garner buzz on the underground and mainstream scene. In 2007, they signed to beloved label Sub Pop Records, with their Sub Pop debut Furr being released in September 2008. In January 2009, we worked with Blitzen Trapper for the first time to promote the “Furr” video. The title track from the album, “Furr” proved that this band was no longer an underground act; following an opening slot for The Hold Steady and a placement on an episode of NBC’s Chuck, plus praise from the likes of Billboard and Pitchfork, Rolling Stone put Furr on their must-have album list, and named the title track their #4 single of 2008.

Poetic, mysterious, and compelling, “Furr” is the story of a man raised by wolves who, despite being seduced by a girl and normal life, still longs for the forest. But this isn’t exactly what plays out on screen; rather than a literal interpretation, director Jade Harris has chosen to enhance and reinforce the song’s dreamlike quality in a partially-animated clip.

That summer, we worked with Blitzen Trapper for the second time, this time promoting the “Black River Killer”. It’s a classic Western outlaw ballad… at least, on the surface. They worked with Portland filmmaker Daniel Elkayam for a clip that combines stunning sets and elaborately-conceived scenes with some seriously trippy digital effects. It’s the kind of video you’ll need to watch a few times to truly unpack all that’s going on.

Following Furr, Blitzen Trapper released Destroyer of the Void in 2010 and American Goldwing in 2011, an album that would be praised by Rolling Stone, Paste, PopMatters, and more. That September, we promoted the video for the American Goldwing single “Love The Way You Walk Away”. It’s a beautiful breakup song, paired with a video that follows the group from rehearsing to to hitting the road, playing to fans across the nation and enjoying the ride along the way.

In 2013, after signing with Vagrant Records, Blitzen Trapper released VII on the label in the US (it was released on Lojinx in Europe). They’ve since released two live albums, Live In Portland and Live In Harvest (a cover of Neil Young’s Harvest), and the studio albums All Across The Land (2015) and Wild and Reckless (2017), for which the band returned to their own label LidKerCrow. In 2020 they released Holy Smokes Future Jokes, their 10th studio album, as well as a Record Store Day release of previously unheard material dating back to 2003-2004, Unreleased Recordings Volume Two: Too Kool. Check out BlitzenTrapper.net to see what they’re up to next!