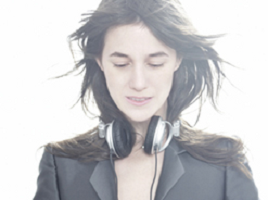 With talented parents – her mother is English actress Jane Birkin and her father was Serge Gainsbourg – it’s no surprise that Charlotte Gainsbourg essentially grew up on film sets. Raised in Paris, she made her film debut in 1984 in Paroles et Musique. She released her first album, Charlotte For Ever, in 1986 when she was only 13, but it was 20 years later before she released the followup, 5:55, in 2006. Also a talented and accomplished actress, she’s appeared in several movies and series, including the 2006 Jane Eyre series. Her talents as an interpreter and storyteller and on bold display on 5:55, and she’s joined by quite the star-studded supporting cast: Nicolas Godin and Jean-Benoit Dunckel of Air composed and performed most of the music on the album, while Pulp’s Jarvis Cocker and Neil Hannon of the Divine Comedy assisted Gainsbourg with the lyrics. Nigel Godrich (Radiohead, Beck, Air) produced it,, and Nigerian percussionist Tony Allen – Brian Eno’s nominee for “best musician in the world” – plays drums on several tracks. The album quickly shot to the top of the French charts and was praised in France, the UK, the US, and more.

In March 2007, we worked with Gainsbourg for the first time on her “The Songs That We Sing” video. Here, director Nathalie Canguilhem shows Gainsbourg singing to herself, as if lost in thought. It’s set in a recording studio, but nothing seems to be set up when things open. She waits, and waits, and waits… and then the rest of the musicians arrive.

That summer, we worked with her again to promote her music video for “The Operation”. This time, she teamed up with fashion photographer Jean-Baptiste Mondino, who created legendary clips like Madonna’s “Justify My Love” and “Human Nature”, worked with French popstars Zazie and Mirwais, and created the moody “The Boys Of Summer” video. It’s mysterious and sexy, as she interacts with a shirtless young man that looks just as much like a pin-up model as Gainsbourg does here.

Gainsbourg has since released three more albums, IRM (2009), Stage Whisper (2011), a double-album that consisted of unreleased tracks from IRM as well as live tracks, and Rest (2017), which explores her feelings relating to her father’s alcohol addiction and death with lyrics in English and French. Tove Lo has since cited her as a major influence. In 2014, she relocated to New York City after spending most of her life in Paris. She’s also been working as an ambassador supporting the Hear The World Foundation, and continues to act in several films. Gainsbourg also tours often, playing shows and festivals in many different countries, and in fact performed at the Beacon Theatre in New York in March. You can also check out www.CharlotteGainsbourg.com to see what she’s up to!