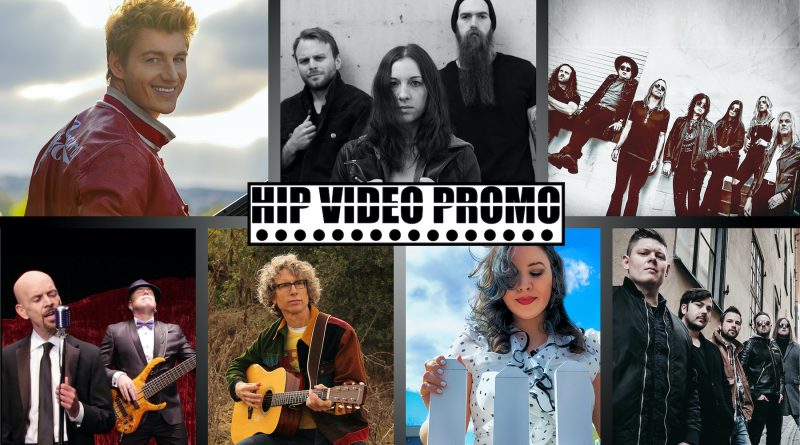 WordPress Image Carousel
Spring is in full swing, and whether your mood is to stay in or you’re looking for some inspiration, we’ve got something to fit your vibe. Our newest HIP Picks – Weekly Client Roundup is here- take a look at the videos above, and learn more about the clips by clicking on the links below.

Actor, singer, composer, director, producer, and screenwriter – not to mention X-Factor, Wipe Out, and Dancing With The Stars champ, and an upcoming role on Netflix’s Space Force – Alex Sparrow is the pride of Russia, with his recent single “She’s Crazy But She’s Mine” securing over a billion streams between Facebook and YouTube. “Let’s Stay Home Tonight” was originally written as a plea to a lover to drop their fancy plans to stay in for a date night, but it’s certainly taken on a new meaning in these times. Alex, who directed the video, wanders the deserted streets of LA in search of the goods, joined by his corgi and his new lady friend.

“The Death of Me” Music Video: Tom Keifer #keiferband (Rock)

Sure, Tom Keifer has had seven voice surgeries – but the man’s also got eight major hits to his name. “Rise”, the title track from #keiferband’s latest album, was a Top 40 single on the Billboard Mainstream Rock chart. It was written by Tom and Savannah Keifer, alongside Shawna and Keifer Thompson of the mega country duo Thompson Square. Staying true to the song’s roots, in Vicente Cordero’s videos #keiferband heads to Nashville’s historic Layman Drug Company, a pharmacy turned studio, providing and iconic setting and triumphant serenity.

Jane N’ The Jungle have been heavy hitters since 2013; they come in strong and deliver even stronger music. The Arizona natives have established their presence in their local scene but have expanded their reach through industry recognition and digital growth: they’ve had original music licensed on Honda commercials, plus a Ford sponsorship for their first album, Concrete Jungle, and to date have reached over 1 million Spotify streams. Their new single “Animal” was produced by Grammy Award-winning Producer/Engineer Chuck Alkazian, and in contrast to past videos, for Rachael Smith’s video, they’ve minimized the background, standing on a clean white slate with only the essentials: their instruments.

David Haerle’s second album Death Valley is a marriage of guitar-driven rock to a shimmering California sound, calling out to the best of classic American and British rock. “Romy and Michele” is an homage to the beloved, feel-good film Romy and Michele’s High School Reunion, and the video – which Haerle directed alongside Michael Pottle – was shot in Venice, CA, on the beach in front of the apartment building where the characters lived in the film.

“Go Do That With Sharon” Music Video: David Haerle (Rock/folk)

The songs on singer-songwriter David Haerle’s Death Valley (the follow-up to his 2018 debut Garden of Edendale) track one man’s search for a renewal of spirit and his growing ability to find beauty and gratitude in the small miracles of daily life. The music is inspired by those moments of direct experience that make us feel we are part of a much greater whole. A veteran of the music business, Haerle heads up the L.A. based record company CMH Label Group where he continues to champion the independent spirit in music. “Go Do That With Sharon”, directed by Haerle and Michael Pottle, was shot in and around Death Valley, at the Salton Sea, Slab City, Salvation Mountain, East Jesus, Bombay Beach, Area 51, the ET Highway, Rachel, NV, Lake Delores Waterpark, the Mojave Air and Space Port, and other magnificent California and Nevada locations.

During an endlessly inventive two-decade run, Snuttock has made electronic music in nearly every cutting-edge style, and they’ve excelled at all of them: dark industrial detours, wigged-out experiments, synthesizer meltdowns and ambient cooldowns, and bleak mechanical fantasies that teeter on the edge of madness. “Stay” is their latest single, and the first track to be released from the upcoming album of the same name. Ernie Mosteller’s clip for “Stay” is creepy, but always high-spirited; it’s a romantic video for sure, but not without a looming sense of danger.

From raw lyrics scrawled on a Post-It nearly a decade ago to their debut album, released in the summer of last year, Stockholm’s Tainted Black have had a long road. Gaining momentum with dozens of live shows, including a successful run at Emergenza Fest, but with no recording budget, the band taught themselves how to make an entire album in their practice space. “Nirvana” is the second single and first video from that self-titled record, and Sebastian Forssman’s clip was shot in the room where they wrote, rehearsed, perfected, and recorded the album, filmed them in stark black and white.

Faith-based singer Christina Morgan-Diaz has been dedicated to Christ since her early youth days. Throughout her life, God has given her opportunities to showcase and extend her extraordinary talent and worship.  Soon after she decided to pursue her musical gift fully, the advocate was ministering to hundreds of women as a featured soloist in the Dominican Republic and sharing the stage at Madison Square Garden and Izod Center for the Christ Tabernacle Choir for Hezakiah Walker and The Katinas. Not only does Diaz spread her praise through uplifting hymns, but she also provides valid mental health support as a licensed therapist. Her benevolence is evident in the music video for “I Need More”, an uplifting track written by Pastor Thomas Johnson and donated to Diaz so she could fulfill his vision. Her presence is conspicuous in the soft natural tones of Forest Park in Queens, NY, as she stands strong and resilient in a radiant blue dress.