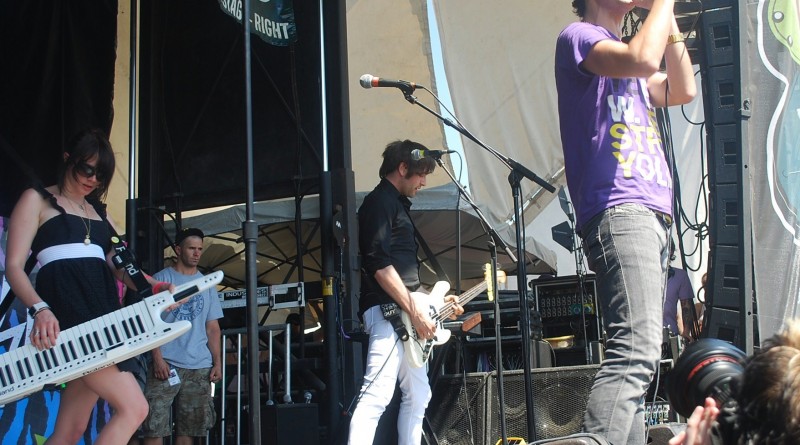 When you think of music in the mid-2000s, what comes to mind? For those immersed in the alternative music scene, this was the epitome of the “neon” era. One of the groups at its helm was Cobra Starship. Formed in 2006 by former Midtown bassist Gabe Saporta, Cobra Starship’s debut album While the City Sleeps, We Rule the Streets was released on Fueled By Ramen / Decaydance that October. But before the album, Saporta released the first Cobra Starship single, “Bring It! (Snakes On A Plane)”, that summer as a part of the soundtrack to the film Snakes On A Plane.

For the “Bring It! (Snakes On A Plane)” video, Saporta was joined by members of Decaydance / Fueled By Ramen labelmates (and fellow former HIP clients) The Academy Is… and Gym Class Heroes, and The Sounds at the Honolulu International Airport, on a mission to sneak snakes on to a plane. Samuel L. Jackson also makes a cameo in this clip that’s part action, part thriller, and all fun: “Bring It! (Snakes On A Plane)” will make you want to dance.

Cobra Starship went on to release three more albums: ¡Viva la Cobra! (2007), Hot Mess (2009), and Night Shades (2011). The group hit the road hard for years, making appearances on the Vans Warped Tour (2008), supporting bands like Fall Out Boy, and hitting the UK and Europe, Australia and New Zealand, and Japan on various overseas runs. In early 2014, Midtown announced a reunion performance at the Skate and Surf Festival; Cobra Starship released a new single, “Never Been In Love”, that August and performed on Jimmy Kimmel Live! that fall. Unfortunately, just over a year later – in November 2015 – Cobra Starship announced that they were breaking up.

Since the band called it a day, its members have kept busy. Former lead guitarist Andy Barr toured with the classic rock band America; keyboardist Victoria Asher is recording as a solo artist (under the moniker “Vicky T.”); drummer Nate Novarro is playing with DALES (the new project of Brian Logan Dales, formerly of The Summer Set); and Saporta has shifted from writing and performing music to working behind-the-scenes: he partnered with Mike Carden (formerly of The Academy Is…) to form The Artist Group, a talent management firm.

We were big fans of Cobra Starship from the start, and we’re always thrilled to see what new artists are on the Fueled By Ramen roster! We can’t wait to see who becomes the next break-out artist. Do you think your video has what it takes to be the next break-out smash hit? Get in touch with Andy Gesner and the rest of the HIP Video Promo team by giving us a call at (732)-613-1779 or emailing us at info@HIPVideoPromo.com.