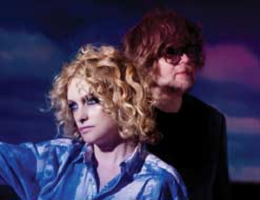 Goldfrapp was the epitome of EDM before the term was even used. They helped pave the road for modern DJs by fusing glittering post-trip-hop, glam rock, Day-Glo club music, and spectral, trippy folk. Yet they are best described as infectious dance-pop. Singer, composer, and keyboardist Alison Goldfrapp and composer Will Gregory formed in 1999 in London. After one of Goldfrapp’s friends passed on her demo to Gregory, the duo banded together based on their similarities in musical tastes and approaches. They signed to Mute Records right away and isolated themselves in a countryside bungalow to work on music.

The albums Supernature (2005) and Head First (2010) both reached the top 10 in the UK and earned Grammy nominations in the United States. Their Felt Mountain Tour required an extensive crew of 40 supporting musicians. Goldfrapp even loves to pay homage to their artsy inspirations of nature, paganism, and the early eighties.

“Rocket” was the first-ever video we worked with Goldfrapp on. In this eye-catching clip, Alison Goldfrapp has always carefully tailored her visual iconography to match her music. Here, she’s an attractive truck driver behind the wheel of an eighteen-wheeler toting a gigantic, hot pink rocket strapped to the flatbed of her truck and in the passenger’s seat, sits a man duct-taped from head to toe soon to be the catalyst for a cloud of orange smoke.

A few months later, in 2010, we promoted their music video for “Alive.” Alison is singled out as a leader standing on her distinguished platform and overlooking a group of slightly demonic-looking men. A dance sequence breaks out by women dancers atop a pentagram designed floor. It’s revealed that Alison is actually a queen vampire, and she directs her fellow women vampires to bite into the demonic-looking men.

Speaking about crafted visual iconography, Goldfrapp released their clip to “Anymore” in 2017. The music video has a balanced surreal and elemental nature blended with striking choreography. The volcanic island of Fuerteventura compliments the dramatic Silver Eye and features twins that Alison found on the streets of London.