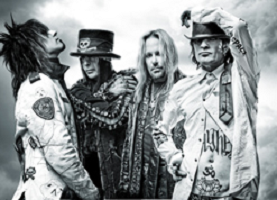 Has there ever been a hard rock or heavy metal band as iconic as Mötley Crüe? With a career that spanned 34 years (from January 1981, when bassist Nikki Sixx, drummer Tommy Lee, and vocalist / guitarist Greg Leon began rehearsing, to their final show in December 2015), they shaped and defined a genre. Formidable and theatrical, Mötley Crüe managed to reach a mass audience without compromising either wattage or bad attitude.

On June 24 2008, Mötley Crüe released their ninth studio album, Saints Of Los Angeles, which saw the band’s original lineup together for the first time since 1997’s Generation Swine. The album debuted at #4 on the Billboard charts and that fall, we began a campaign promoting the video for “Mutherfucker Of The Year” (“MF Of The Year”), which reached Top 5 at active rock radio and the Top 10 on mainstream radio. While Mötley Crüe’s albums speak for themselves, their theatricality and showmanship was developed through their dedication to being a live band. The video for “MF Of The Year” was shot at  Crüe Fest, a national arena tour that featuring Trapt, Buckcherry, Papa Roach, and Sixx A.M. It’s a combination of live and behind the scenes shots, and shows the band in their over-the-top, hedonistic rock and roll lifestyles. Fans get a peek behind the scenes but the real action comes when the band is on stage.

While Saints Of Los Angeles ended up being Mötley Crüe’s final studio album, the band continued hitting the road hard for the next seven years. Rumors of the band’s retirement began spreading in February 2013, and in January 2014 they announced the retirement along with a 70-date North American tour with Alice Cooper. After a round of international shows in Japan, Australia, Brazil, and Europe in 2015, they hit the road for a final North American tour throughout 2015. Mötley Crüe’s final shows took place at the MGM Grand Garden Arena in Las Vegas on December 27, and at the Staples Center in Los Angeles on December 28, 30, and 31, 2015. The final New Year’s Eve show was released as a live album and DVD in 2016 titled Mötley Crüe: THE END.

We were fans of Mötley Crüe through to the end, and it was a profound honor and pleasure to partner with the band for the “MF Of The Year” video! We’ve always got our eyes on the future, and it’s a thrill to partner with new and up-and-coming artists to see who will go on to develop a lasting legacy. We can’t wait to see who becomes the next break-out artist. Do you think your video has what it takes to be the next break-out smash hit? Get in touch with Andy Gesner and the rest of the HIP Video Promo team by giving us a call at (732)-613-1779 or emailing us at info@HIPVideoPromo.com.