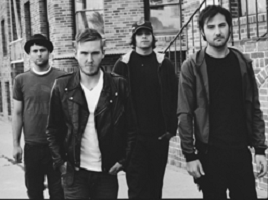 New Jersey has a rich history of underground music, and while the whole Garden State has been home to a plethora of artists, we’re proud to say that New Brunswick – right in our backyard here in South River – is home to a vibrant music scene . One of New Brunswick’s most notable acts – who have helped shape and define the punk rock scene over the past 12 years – is The Gaslight Anthem.

The Gaslight Anthem’s sophomore album, The ’59 Sound, released in August 2008 on SideOneDummy Records, was an instant classic: outlets ranging from PunkNews (who praised its excellent mixture of old and new, punk and soul) to Pitchfork (who called it “an answer to a prayer”) gave their accolades, and fans were drawn to a sound that was straightforward and heartfelt, with songs so pure it was as if they’d always existed.

We had the pleasure of partnering with the band to promote three videos from The ’59 Sound: “Great Expectations”, “The ’59 Sound”, and “Old White Lincoln” in the spring of 2009. If one thing was clear from these clips, it’s that whether they’re in a concrete room with chandeliers hanging from the ceiling (“Great Expectations”), the living room of a typical suburban home (“The ’59 Sound”), or as animated clips on flyers in bars and venues across the country (“Old White Lincoln”), The Gaslight Anthem are a band that are at their best when performing live.  After the June 2010 release of the follow-up album American Slang (which saw incredibly positive reviews from The New York Times, Rolling Stone, and SPIN), we promoted the video for “American Slang”, which juxtaposes the various sites of New York City (kids playing in a fountain; Wall Street; the New York Police Department); and the following summer we shared “Bring It On” , which follows the trials and tribulations of a young couple as the band plays their hearts out on an abandoned factory floor.

For their fourth album, Handwritten (released in July 2012), The Gaslight Anthem signed to Mercury Records; though they partnered again with SideOneDummy for the Singles Collection: 2008-2011 and The B-Sides (June 2013 and January 2014, respectively), their fifth album Get Hurt (August 2014) was released through Island Records, which had absorbed Mercury.

In July 2015- less than a year after the release of Get Hurt– The Gaslight Anthem announced that they’d be going on an indefinite hiatus following the conclusion of their summer tour at Reading Festival that August. Frontman Brian Fallon went on to release a solo album, Painkillers, and EP, Georgia, in 2016; his second solo album, Sleepwalkers, will be released next month.

In the midst of a cold, snowy winter, The Gaslight Anthem fans got the surprise of a lifetime: this Wednesday, January 3, 2018, the band announced they’d be reuniting for Governors Ball in June, where they’ll be playing The ’59 Sound in full. While further dates have yet to be announced, per a recent Tweet, it appears they are planning to play more shows celebrating the tenth anniversary of the album’s release.

While no artist could replicate the unique sound The Gaslight Anthem has created, if you’re a fan of their blue-collar, leather jacket folk-influenced punk sound, we have to suggest checking out Radiator King’s music video for “The Guns You Pawned.” Adam Silvestri grew up in the Boston hardcore and punk scene, and with Radiator King he brings DIY ethos to an Americana-driven style.

We’ve been fans of The Gaslight Anthem since day one, and we’re eager to see what else they have in store for the future! We can’t wait to see who becomes the next break-out artist. Do you think your video has what it takes to be the next break-out smash hit? Get in touch with Andy Gesner and the rest of the HIP Video Promo team by giving us a call at (732)-613-1779 or emailing us at info@HIPVideoPromo.com.