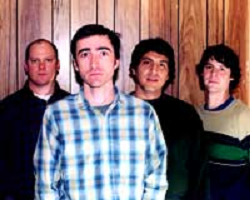 When you think about indie rock music over the past two decades, what artists define the genre? Originally formed in Albuquerque, New Mexico as a side project to James Mercer’s band Flake Music back in 1996, The Shins have gone on to become one of indie-rock’s definitive acts. They signed to Sub Pop Records and released their debut LP Oh, Inverted World in 2001; after the success of the single “New Slang” (it was featured in a McDonald’s commercial that aired in the 2002 Olympics), Mercer and co. moved to Portland, Oregon, where the band is still based.

If life is a journey, then The Shins’ video for “The Past And Pending” is a video about life. “The Past and Pending” emphasizes the romantic ideas of a “road trip”, as a driver / photographer treks from the country to the big city, accompanied by a quiet, unassuming father figure. With echoes of classical music (minimal percussion, triumphant French horn, and Renaissance modalities), “The Past and Pending” is also a celebration of all that’s great about America, and our hero is set to document every step of his journey, with an antique Polaroid camera in hand along the way.

In 2003, The Shins followed up Oh, Inverted World with Chutes Too Narrow; that fall, we promoted the clip for “So Says I”. At first glance, the clip – which centers around a group of animated penguins – may seem like mindless fun, but it’s worth your full attention. Directed by Plates Animation (Mogwai, etc.), “So Says I” tells the story of a totalitarian society of penguins who’re plotting global domination; it’s dark, powerful, and evocative. “So Says I” has since become a fan favorite; the band even played it live in an episode of Gilmore Girls (Season 4, Episode 17: Girls In Bikinis, Boys Doin’ The Twist).

In the early summer of 2004, we had the pleasure of working with The Shins once more to promote the video for “Kissing The Lipless”. And in a rare moment, this video features the band members themselves: dressed casually, they’re shown performing in their element, in frontman James Mercer’s Portland, Oregon basement home studio. These performance shots are combined with shots of an ice skater, but the leaps, twirls, and twists seem to point to something odd about him.

The Shins released another album, Wincing The Night Away, in 2007, but then went on a hiatus for several years. The group returned with Mercer as its only original member in 2012 and released Port of Morrow that year. They’ve continued to be a favorite in the world of indie-rock; most recently, they released Heartworms in 2017 and a reimagined, “inverted” version of the album The Worm’s Heart this year.

We’ve been big fans of The Shins from the start, and we can’t wait to see what they do next! We can’t wait to see who becomes the next break-out artist. Do you think your video has what it takes to be the next break-out smash hit? Get in touch with Andy Gesner and the rest of the HIP Video Promo team by giving us a call at (732)-613-1779 or emailing us at info@HIPVideoPromo.com.